Home>Politics & Policy>Tunisia heads to runoff presidential election with Saied, Karoui
By AT editor - 18 September 2019 at 12:53 am 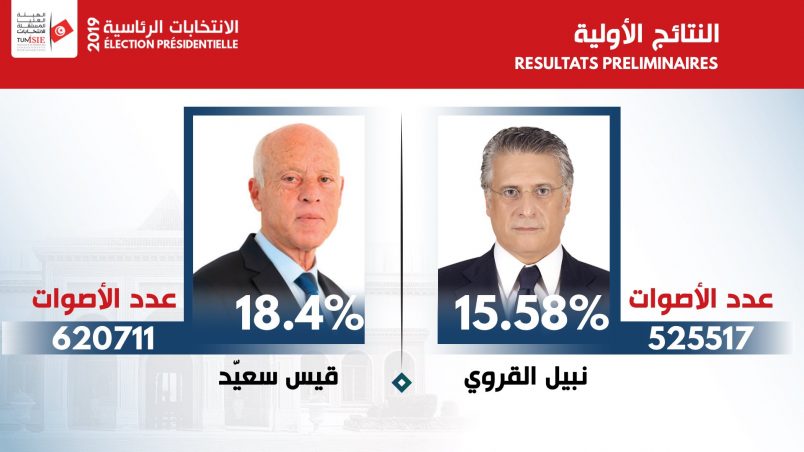 Tunisia is headed for a runoff election between two candidates whose showing at the polls on Sunday reflects the country’s economic uncertainties and a rejection of the existing political leadership.

The ISIE, Tunisia’s independent electoral commission, posted results early Wednesday confirming that law professor Kais Saied received 18.4 percent of the vote while business leader and media house owner Nabil Karoui took 15.6 percent. They will face each other in an election that has not yet been scheduled.

The winner will replace Beji Caid Essebsi, the late Tunisian president who died at age 92 in July.  Mohamed Ennaceur, head of the country’s National Assembly, was sworn in as interim president just hours after Essebsi’s death was announced. He has no more than 90 days to serve in the transitional position under Tunisia’s constitution.

Karoui, meanwhile, remains in prison on financial-crimes charges that he claims are politically motivated. He would be ineligible for the office if he were convicted of fraud and money laundering in the interim.

Voters who have seen unemployment rise, and protested the price of basic goods that rose along with it, rejected other candidates who may have appeared to be business-as-usual politicians. They include third-place candidate Abdelfattah Mourou, who helped to launch the Ennahdha party, which holds a legislative majority in Tunisia. They also included Yousef Chahed, who is currently serving as prime minister of Tunisia.