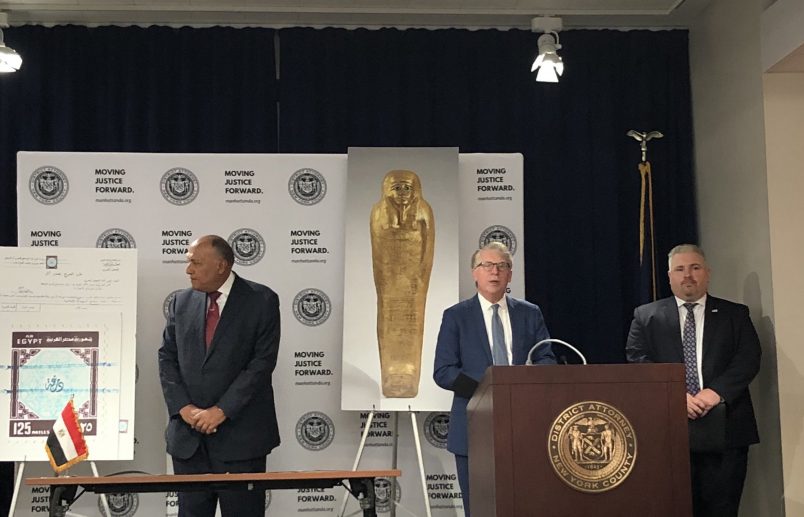 The United States has returned a gold coffin worth US$4 million to Egypt, after it was stolen from the Minya region during the 2011 revolution, made its way to the Metropolitan Museum of Art in New York and was discovered on display in February.

The ceremony to return the Gold Coffin of Nedjemankh was held with Egyptian foreign minister Sameh Shoukry on Wednesday. Shoukry was in New York to attend the United Nations General Assembly.

The coffin’s journey saw it smuggled out of Egypt, taken through the United Arab Emirates, restored in Germany, moved to France and then sold to the prestigious MOMA in July 2017. The Manhattan District Attorney’s office, working with agencies in Egypt, France and Spain, seized the coffin, and the city’s Antiquities Trafficking Unit began working to return it to Egyptian authorities.

“Once presented with evidence of the theft, the Metropolitan Museum of Art fully cooperated with the Manhattan District Attorney’s Office,” the DA office said in a statement.

“Coming as we do from all over the world, New Yorkers place a strong value on cultural heritage, and our office takes pride in our work to vigorously protect it,” said Cyrus Vance Jr., head of the Manhattan office. “Returning stolen cultural treasures to their countries of origin is at the core of our mission to stop the trafficking of stolen antiquities.”