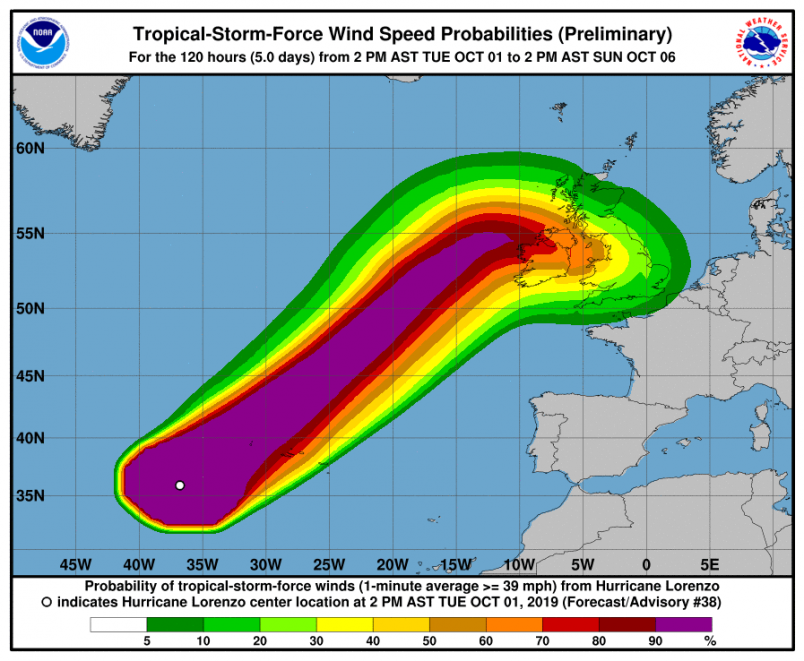 The good news is that Hurricane Lorenzo won’t affect the African continent, and the winds from its record-setting status as the farthest north and east any powerful Category 5 storm has ever been in the Atlantic Ocean have decreased. The storm has winds reduced to 160 kilometers per hour now, according to an advisory issued by the National Hurricane Center in the United States on Tuesday afternoon (9 p.m. local time in Azores).

Those winds are headed into the Azores, as the storm is forecast to impact the island group Tuesday night. The Portuguese Institute of Sea and Atmosphere (IPMA) has issued its highest-level red warning for wind in the western and central island groupings beginning as early as midnight, and warns of wind gusts up to 190 km/h in western spots.

“However, the entire archipelago will feel the effects of Hurricane Lorenzo,” the IPMA said.

Equally serious are the heavy seas associated with Hurricane Lorenzo, which have already proved hazardous to maritime interests. The IPMA also issued a red warning for the western islands for waves of 10 to 15 meters, with the possibility of some waves reaching a height of 25 meters.

At least three people died after the offshore tugboat Bourbon Rhode sank in the middle of Hurricane Lorenzo last week. According to a statement from the company on Tuesday, the bodies were found during a search that continues for another eight missing mariners. Three people in a lifeboat were rescued at the weekend.

The odd storm now is expected to continue to the northeast with impacts from Hurricane Lorenzo expected in Ireland and the UK.