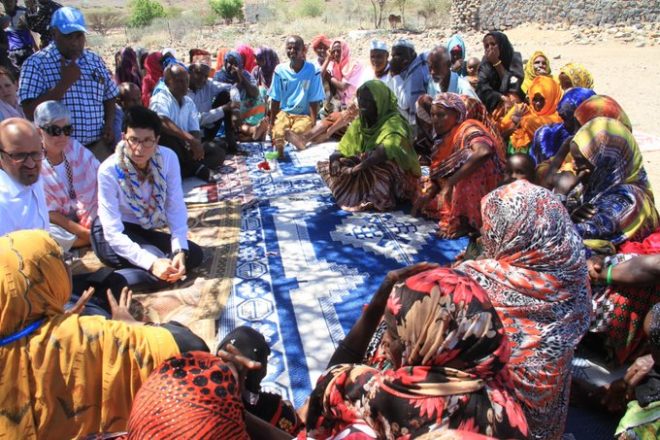 Djibouti is already feeling the impacts of climate crisis, and after a three-day tour of the Horn of Africa nation, the assistant secretary general for the United Nations humanitarian agency OCHA is calling for action.

“Climate change is real, and I could see it here,” said UNOCHA’s Ursula Mueller. “I saw the widespread drought and I met communities that can barely access safe water. They explained to me how this situation is impacting their lives. Djibouti has (made) virtually no contribution to the global climate emergency, but its population is suffering the consequences on a daily basis.”

Mueller said swaths of the nation are exposed to extreme weather conditions and when coupled with poverty, that’s left one in three people there food insecure.

“Severe acute malnutrition rates are alarming and considered an emergency according to global standards,” Mueller said. “In Bondara village, women told me how they were doing whatever it takes to put food on the table for the family, but the frequent droughts are preventing them from doing so.”

The village in the country’s south also is on a transit route for migrants from Ethiopia who are headed to Gulf states in hopes of finding work. Some 130,000 migrants, refugees and asylum seekers are living in Djibouti, which is considered strategically important by both China and the West. Both have military bases there, and the coastal country perches alongside key shipping routes, but it’s less often that attention is called to the people who live there – especially in terms of climate crisis.

“Government needs further support to help communities build up resilience, to be self-sufficient so that the recurring shocks do not lead to further suffering and more costly crises,” she said.