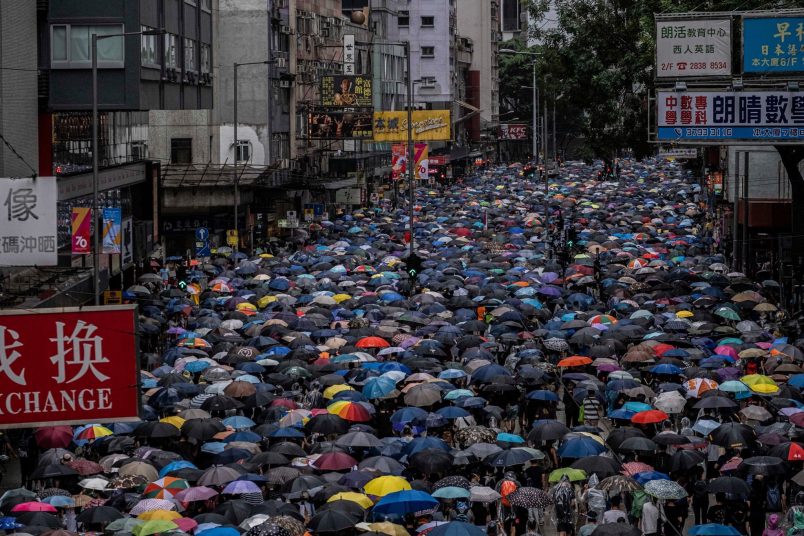 Most African nations adhere to the “One China” policy of Beijing and are careful to avoid offense when the policy comes into diplomatic question. The South African kingdom of eSwatini, for example, is the only nation on the continent that maintains its diplomatic ties with Taiwan; the Dalai Lama of Tibet is no longer welcome in Botswana, after tense exchanges when he planned but canceled a 2017 visit that raised the ire of China.

Now it’s the Hong Kong crisis that’s under scrutiny, and Uganda has gone on record to say it supports Beijing. It issued a statement late last week describing the protests as “radical and violent,” and reiterated its support for Chinese authority in what, since 1997 and Hong Kong’s separation from the UK, is a special autonomous region.

That crisis appeared to escalate over the weekend as the demonstrations, which have gone on for weeks, took another violent turn.  Thousands of protesters took to the streets in the rain Sunday, carrying the umbrellas that have become the signature of Hong Kong’s movement to preserve its autonomy.

Any hopes for peaceful protest were dashed, though, as marchers clashed with security forces and violent mobs set fire to businesses, government offices and even a train station. Some city services that were shut down on Friday remained so, as this latest march focused on the decision by Hong Kong courts to uphold a ban on wearing face masks often used to conceal identity or protect against tear gas.

Tear gas was deployed again, with reports that a second person has been shot by police using live rounds. “Video footage showed a bloodied man laying on a road after he was dragged out of the taxi he was driving and stomped on by a group of protesters after the vehicle hit some of them,” reported Bloomberg, referring to video shared widely on social media.

The government in Hong Kong, led by Carrie Lam, condemned the violence in a statement. “A large number of masked rioters blocked roads and vandalized public property, Mass Transit Railway stations as well as selected banks and shops,” the statement said. It added the protesters also threw firebombs at police and attacked public citizens.

These events have “thrown the community into panic and chaos, affecting many public services and prompting malls and shops to suspend business for fear of vandalism,” the government said.

Hong Kong also pushed back against rumors that followed Lam’s decision to invoke emergency powers and ban the masks. Pro-democracy protesters including Joshua Wong, arguably the face of the movement, have been concerned that the decision will be followed with increasingly draconian measures that essentially erase Hong Kong’s autonomy in the face of an authoritarian and ascendant China, which has long been the underlying fear.  Wong called the mask ban “the beginning of the end of Hong Kong.”

One rumor officials hoped to dispel was that Hong Kong’s banking authority would shut down access to money as part of an emergency move that would shutter businesses, schools and the stock market. The Emergency Regulations Ordinance rumors led to a run on banks and ATMS in some parts of the region.

“The authority already issued a statement today saying that the message was totally fake and unfounded,” the government said. “The authority also pointed out that the Hong Kong banking system is robust and sound, and that banks have sufficient supply of banknotes to meet the public’s needs.”

Africa, both the inspiration and the opposition

Hong Kong has long feared that its special status, negotiated under the 1997 agreement, would be compromised and activists have for years pushed back at decisions that appeared to give China more power than was yet agreed. This year’s proposal to allow extradition of Hong Kong residents and leave them vulnerable to Chinese courts – and threaten dissent – touched off the spark that is now a fire. The heat has now reached African leaders, some of whom, like the late Nelson Mandela of South Africa, are held up as role models for Hong Kong’s own movement.

While few African nations have been as straightforward as Uganda, it’s not unusual for Beijing to seek their agreement with its one-China policy and several countries have done so in recent weeks. Liberia’s president, George Weah, met with President Xi Jinping and reasserted his nation’s support for the policy.

So did Malawi’s foreign minister, Francis Kasaila, who met with his Chinese counterpart a few weeks ago in New York City as world leaders gathered for the United Nations General Assembly. So did the defense minister of Zimbabwe, who reasserted the country’s One China allegiance during China’s 70th anniversary celebrations in Harare last week.

The Uganda statement amplifies a commonly held African view, while directly linking the policy to its specific concern over the events in Hong Kong.