Home>African Future>Abiy says Nobel award is a 'collective win for Ethiopians'
By AT editor - 11 October 2019 at 4:15 pm 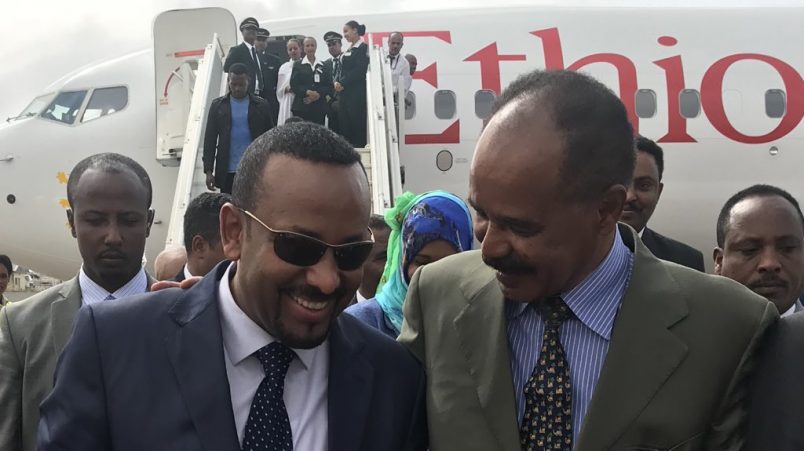 The Nobel Peace Prize 2019 was awarded to Ethiopian Prime Minister Abiy Ahmed on Friday, in honor of what the Nobel committee described as “his efforts to achieve peace and international cooperation, and in particular for his decisive initiative to resolve the border conflict with neighboring Eritrea.”

Abiy, the 43-year-old Oromo leader who took office in April 2018, said he was “humbled and thrilled” to hear the news during a phone call from Olav Njølstad, the secretary of the Norwegian Nobel Committee in Oslo. The prize, the committee added, was meant to recognize all the stakeholders working for peace and reconciliation in Ethiopia and in the East and Northeast African regions.

Abiy expressed his hope for the region, a hope that Njølstad was quick to say the Nobel committee shared.

“Peace does not arise from the actions of one party alone,” the committee said in its announcement, which praised Eritrean President Isaias Afwerki, right, for responding to Abiy’s overture and becoming a partner in peace. They also noted Abiy’s commitment to democratic reforms in Ethiopia, where the progress away from historic government repression remains uneven and criticism of the prime minister is common too.

The Nobel committee statement acknowledged that some challenges – particularly ethnic conflict – are still unresolved. They conceded that some may think it “too early” for Abiy’s award, but it reflects their sense that it is above all now that he deserved to be recognized and encouraged.

“In Ethiopia, even if much work remains, Abiy Ahmed has initiated important reforms that give many citizens hope for a better life and a brighter future,” the committee concluded.

The official response from the prime minister’s office called the Nobel award a collective win for Ethiopians, one that is a call to “strengthen our resolve in making Ethiopia – the New Horizon of Hope – a prosperous nation for all.”

More information on the award is available here.