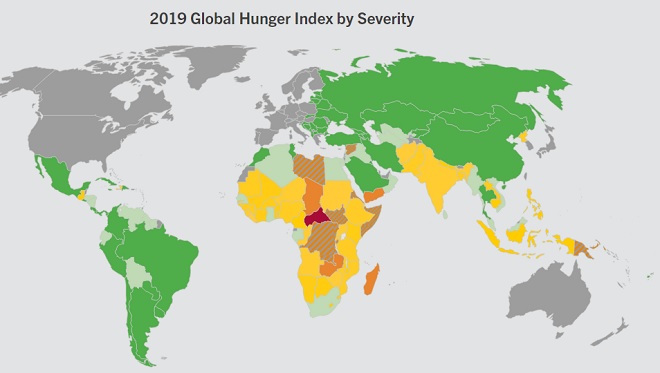 The Central African Republic has, for the second year in a row, topped the list of nations whose people suffer from hunger – and did so with a Global Hunger Index (GHI) score that makes it the only country in the world where hunger is rated as extremely alarming.

The C.A.R. score of 53.6 is calculated on the basis of undernourishment, child wasting, child stunting and child mortality, and their prevalence in the country. Nations in the next tier include Chad, Madagascar and Zambia, with nearly all of sub-Saharan African reflecting an elevated risk.

“Perhaps most troubling is that while the prevalence of undernourishment consistently declined between 1999–2001 and 2013–15, it has since reversed course and begun to rise,” the report said. The region has the world’s highest concentration of people who work in agriculture at 55 percent, but has the world’s lowest yield and productivity output too – and climate change continues to make it worse.

“This year’s Global Hunger Index provides a timely illustration of how climate breakdown disrupts food systems, jeopardizing one of the most fundamental rights we all share as human beings – the right to adequate and sufficient food,” said climate champion Mary Robinson, the former president of Ireland.

The North African nations of Tunisia, Morocco and Algeria, as well as the Indian Ocean island nation of Mauritius, had the lowest GHI scores. They were not available for Somalia, South Sudan, Democratic Republic of Congo and other nations for which there was not enough data, though the hunger risk is known to be significant.