Home>Commentary>Tensions escalate as Mozambique awaits election results
By Laureen Fagan - 17 October 2019 at 5:12 am 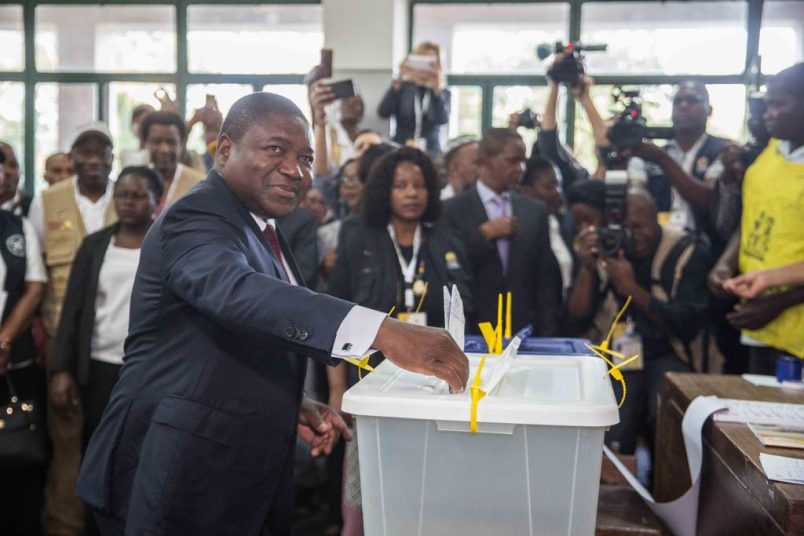 Incumbent President Filipe Nyusi and the long-ruling Frelimo party appear headed toward unsurprising victory in Mozambique, but as votes are still being counted, there are equally unsurprising charges of gross irregularities and electoral violence casting a shadow on the results – and the struggling southern African nation’s future.

The National Election Commission (CNE), working alongside the Technical Secretariat for Election Administration (STAE), expects to begin releasing results on Thursday with complete results on Friday. By early morning, 29 percent of the vote had been reported, according to election monitor Sala da Paz.

The polling stations across Mozambique are responsible for tallying the votes, but they continue the work with varying degrees of transparency in what observers say is an election marred by misconduct.

“Severe restrictions on observation and failure to publish polling station results in places where opposition is expected to win make it impossible to predict percentages,” said an update from CIP Eleições, which has reported election results and progress in democracy since the end of Mozambique’s long civil war in 1992. “But the partial and initial reports give Frelimo victory by a large margin.”

Opposition candidates have already balked at accepting election results, insisting that Frelimo has manipulated the process. Ossufo Momade, the new leader of Renamo and its presidential candidate, warned that electoral violence is a real threat in the absence of free and fair elections – a scenario that brought tragedy to Mozambique in the wake of 2014 elections that handed Nyusi his first-term win. Frelimo and Renamo returned to conflict until signing a hard-won peace agreement in August.

Electoral violence after decades of division

Those tensions escalated ahead of this election and interfered with the voting process in some locations. Anastancio Matavele, a national election observer and director of the Forum of NGOs for Gaza (FONGA), was shot and killed while leaving a training session just eight days ahead of the polls. According to Human Rights Watch, Mozambique’s national police officers are implicated in Matavele’s death.

“The apparent involvement of police in killing an election observer is a chilling development that casts a dark shadow over the Mozambican elections,” said Dewa Mavhinga, the HRW southern Africa director. Reports of violent attacks and arrests increased; on Tuesday night, as the counting of votes was under way, Renamo’s national spokesman, José Manteigas, was arrested after election officials tried to pull his credentials. Manteigas told Deutsche Welle it was yet another attempt at intimidating the opposition.

Even as Momade arrived to vote for himself, a fight broke out at his polling place. “Images from Mozambican television channels, broadcasting live from the venue, showed staff at the polling station throwing punches inside the polling place while voters crowded at the entrance,” said one news outlet.

Although nearly 13 million voters were eligible to participate, CIP Eleições said initial reports suggested a turnout of about 50 percent. Voter turnout was expected to be low, but beyond intimidation of Nyusi challengers – he faced Democratic Movement of Mozambique (MDM) and AMUSI candidates as well – there are other complications that underscore the political and economic stresses in the country.

In parts of Cabo Delgado in the country’s northeast, polls never opened because of the ongoing security challenges posed by extremists since 2017. Former Nigerian president Goodluck Jonathan, leading the African Union observer mission, said the region’s votes would not change the election outcome but – as recently was the case in Democratic Republic of Congo – barring their participation based on a security rationale reinforces an underlying alienation and anger in Cabo Delgado.

Mozambique’s frustration is by no means confined to the north, after millions of people suffered the impacts of cyclones Idai and Kenneth earlier this year. The storms caused at least 1,000 deaths, displaced tens of thousands in its wake, and left Beira and other parts of Mozambique, including Cabo Delgado, shattered. The World Bank estimates US$2 billion in rebuilding costs from Cyclone Idai alone, amid the country’s well-documented struggles with economic instability and corruption.

“Frelimo’s vote share is likely to be down across many parts of the country compared to the last election in 2014, as many people are unhappy with high levels of income inequality, limited economic opportunity, and pervasive poverty,” said Nathan Hayes, an analyst at The Economist Intelligence Unit. Hayes also warned of instability because of splintering within the Renamo opposition linked to the August peace deal, which was rejected along with Momade’s leadership by a breakaway military arm.

Yet Frelimo, according to projections from Sala da Paz, seemed poised to claim more than 70 percent of the vote amid credible allegations over voter fraud. In one example from Beira, broadcast on STV and shared by human rights researcher Zenaida Machado, there were 252 ballots but only 158 voters for the polling station. The number of incidents like it – as well as reports of violence, intimidation and dozens of arrests – continue to mount, elevating along with them the fears of a deepening Mozambique crisis.