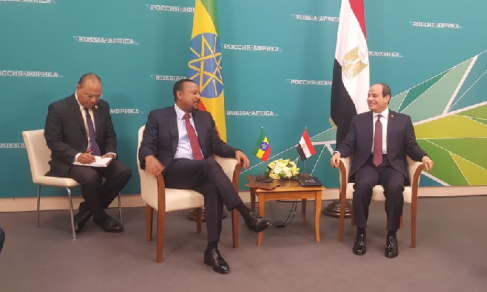 Ethiopian Prime Minister Abiy Ahmed and Egyptian President Abdel Fattah al-Sisi met Thursday to discuss their relationship, which has been marked by tensions over the countries’ dispute over the future of the Nile River and Ethiopia’s dam construction.

The two discussed their mutual issues while attending the Russia-Africa Forum in Sochi, where Sisi is co-chair alongside Russian President Vladimir Putin, according to Ethiopia’s Ministry of Foreign Affairs.

Abiy clarified comments he made that appeared to threaten a military response over the Grand Ethiopian Renaissance Dam (GERD) project, Egyptian authorities added. The two nations, along with Sudan, have failed for several years to reach an agreement over the dam’s impacts to the region.

The Egyptian Ministry of Foreign Affairs issued a statement earlier this week expressing dismay over those comments. Egypt confirmed that the United States offered to host talks aimed at a successful solution, which Russia now has offered to do as well.

Abiy’s government says it needs the 15,000 GWh per year in power for Ethiopians, but threats to the Blue Nile that potentially affect agriculture and water resources for Egypt and Sudan have made any agreement elusive.

Abiy’s surprising earlier comments came as he spoke to members of Ethiopia’s parliament about the dam impasse and were not meant to suggest a departure from diplomatic and technical negotiations.

“The Ethiopian PM affirmed his country’s commitment to the course of negotiations until a final agreement is reached,” Rady said.