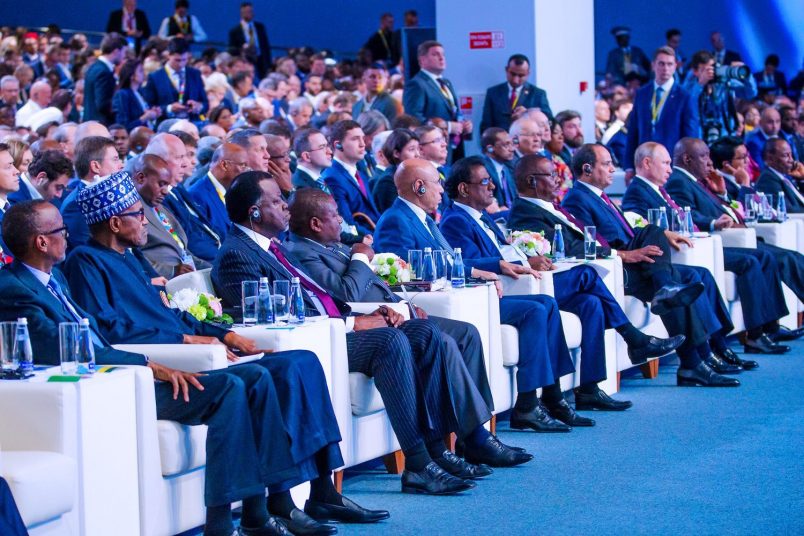 Egyptian President Abdel Fattah al-Sisi and his Russian host and counterpart, President Vladimir Putin, delivered their keynote addresses as the Russia-Africa Forum concluded in the Black Sea city of Sochi.

The two co-chairs of the summit issued a joint statement following the two-day meeting, with African government officials and delegations attending from across the continent and some 40 heads of state on hand. Many of them, including South African President Cyril Ramaphosa and Namibian President Hage Geingob, held separate meetings with Putin while in Sochi.

“Summing up its work over the two days, we can say that this event opened up a new page in the history of Russia’s relations with African countries,” said Putin. “This was a business meeting but at the same time it was very friendly, if not cordial, and this created a special atmosphere for our discussions.”

Putin said the summit declaration will detail mutually agreed upon goals on trade, security and other spheres. Russia will continue to meet with Africa at high-level talks, held once every three years between Moscow’s foreign ministers and those of three selected African nations.

Russia, as a permanent member of the United Nations Security Council, will continue to press for African concerns on peace and stability, he added.

“Russian-African cooperation has come a long way since the middle of last century, when Russia stood by the African countries fighting against colonialism and made a significant material, logistic and spiritual contribution supporting the national freedom fight of the African people,” said Sisi in his remarks.

Sisi said Egypt will next hold a forum on peace and sustainable development in Aswan in December.

The event was the first of its kind hosted by Russia, which is seeking a new engagement on the African continent in competition with China, the United States, and even countries like India and Turkey, which have increased their diplomatic efforts in recent years.