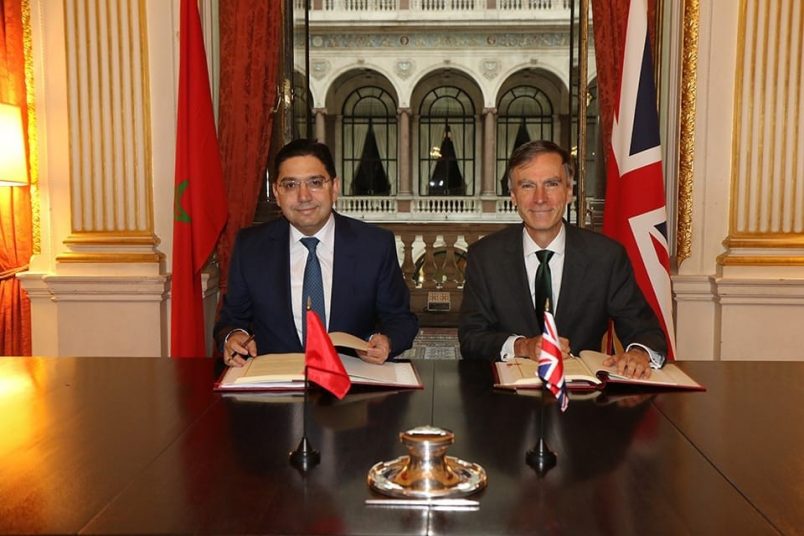 The governments of Morocco and the United Kingdom signed an agreement over the weekend designed to ensure that trade between the two countries will continue as smoothly as possible once the UK leaves the European Union – a deal that underscores the “Brexit” implications for many African nations.

“The signing of this agreement builds on the UK’s deep cultural, political and economic ties with the region and demonstrates our commitment to increase trade and constructive dialogue with Morocco,” said Andrew Murrison, the UK Minister of State for the Middle East and North Africa. “Importantly, the agreement will give exporters and consumers the certainty they need to continue trading freely and in confidence as the UK prepares to leave the EU.”

Moroccan Foreign Minister Nasser Bourita signed the deal from his side, praising King Muhammad VI and noting the relationship between the royal families, but more pointedly touting Morocco’s status as a top export destination for the UK. Britain puts those trade numbers at US$3.2 billion in 2018.

The deal has four mechanisms, the first clarifying that Morocco will enjoy the same privileges and status it had under its EU agreement. It will come into force when – and this remains anyone’s guess – the UK leaves the EU, as was envisioned for the end of this month. The provisions of Morocco’s deal include assurance that all products including those from the “Moroccan Sahara” region will enter the UK.

Historically, the EU has not recognized Morocco’s sovereignty in the Western Sahara, which remains the subject of another round of recent diplomatic talks. Following the agreement news, the UK ambassador to Morocco was quick to assure the UK remains committed to the ongoing United Nations-led negotiations.

Also critical to the UK is the relative stability of Morocco in a moment of North African transition. As former EU ambassador James Moran wrote earlier this month, Tunisia and Algeria are each experiencing leadership transitions, with their aging presidents Beji Caïd Essebsi and Abdelaziz Bouteflika now gone – one through death and the latter forced to step aside. Libya remains unstable, and the wider Sahel increasingly so, which makes Morocco an all the more attractive partner to the EU and eventually-departing UK.

“With this agreement, the UK exit from the EU will not create any interruption in bilateral nations,” the Moroccan side added. “The convention ensures a smooth transition.”

The stalemate in the UK

That Brexit transition is anything but smooth. The UK says it has now struck similar Brexit-driven trade deals with other countries that add up to $139 billion, yet it still hasn’t arrived at a departure deal within its own more than three years after the Brexit vote succeeded. This week will mark six months since failing to meet the original March 2019 deadline for separation.

After a stalled process and internal political battles that saw former UK Prime Minister Teresa May replaced by Boris Johnson in July, the UK said 10 days ago that it had struck a new deal with the EU. That revision never went to a UK parliamentary vote – though it moved closer last Tuesday – and the UK now wants the deadline to extend into January. The months of confusing developments have made work harder for Michael Barnier, the chief negotiator for the EU who continues to balance the goals of European unity with an orderly UK exit that’s critical to Africa and the international community.

European Council President Donald Tusk said in light of the UK circumstances he recommended the remaining EU nations accept the UK delay request; the EU countered with a proposed deadline of January 31. The news, meanwhile, touched off another round of political moves in the UK. As the Associated Press reported Sunday, British lawmakers seeking to hold off Johnson’s Brexit deal now plan to introduce the call for new elections on December 9, which would require the dissolution of parliament 25 days before that. The Conservative Party chief told AP that the move to override Johnson’s own plan is “clearly a gimmick” meant to delay Brexit in a nation bitterly divided over it.

But, as Morocco’s new trade deal demonstrates, the UK is not the only nation affected by Brexit plans. A handful of countries, including Zimbabwe, have established similar agreements for when the UK leaves the EU. South Africa and five other nations in the Southern African Customs Union jointly struck a deal last month to continue trade worth some $12 billion, and formalized it on October 10. The East African Community (EAC), with its long internal battles over EU trade deals in the first place, has faced similar considerations over the significant UK trade that’s at stake.

All of the Brexit-related negotiations with African countries come against the backdrop of the African Continental Free Trade Agreement (AfCFTA), with some seeing a cautionary tale for Africa’s future. Meanwhile, individual nations such as Ghana – despite the assurances of President Nana Akufo Addo – remain concerned about trade and tariff impacts, and continue to hammer out their own positions on a Brexit deal, or the possibility of no deal at all.

What African nations cannot do, and for that matter any other European nation, is settle Britain’s own affairs. Whether African governments welcome a deal, as Morocco has, or fear the implications of the UK’s departure from the EU, they’re still waiting nearly four years on for Britain to come to a consensus and move forward.