Home>African Future>Ahead of COP25, BASIC nations reaffirm climate commitments
By AT editor - 28 October 2019 at 2:10 am 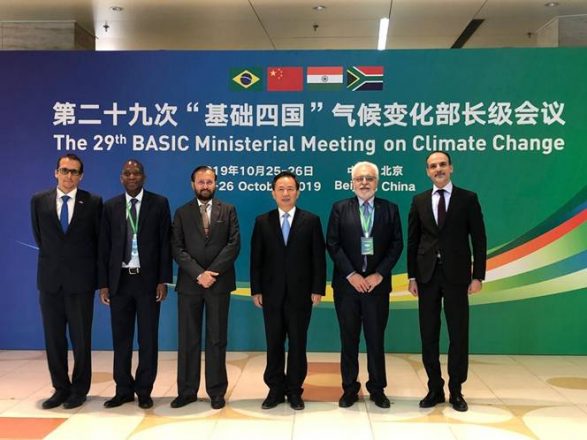 China hosted a meeting of key BASIC environmental ministers at the weekend, a group that also includes South Africa, India and Brazil – all of them pressing the case to act on climate change.

The South African agency was represented in Beijing by its chief climate negotiator, Maesela Kekana, and it summarized outcomes of the meeting that were released in a formal communique at its conclusion. Also attending the Beijing BASIC talks were guest representatives from Palestine and Chile, which will host the next United Nations Conference of the Parties (COP25) climate change conference in December.

Ahead of that conference, the BASIC ministers reaffirmed their commitment to the Paris climate agreement achieved in 2016. They also stressed the need for rich countries to meet their obligations, with a special emphasis on how adaptation is underfunded in some of the nations that need it most.

“Ministers underscored that as developing countries are the most adversely affected by climate change, adaptation is a key imperative but is neglected with imbalanced allocation of resources compared to mitigation,” the formal joint statement said. “They reiterated that balanced allocation should be made for adaptation and mitigation in terms of support provided by developed countries, including through Green Climate Fund (GCF).”

The ministers were quick to note they are taking “ambitious action” themselves to ensure they meet their Nationally Defined Contributions (NDC).