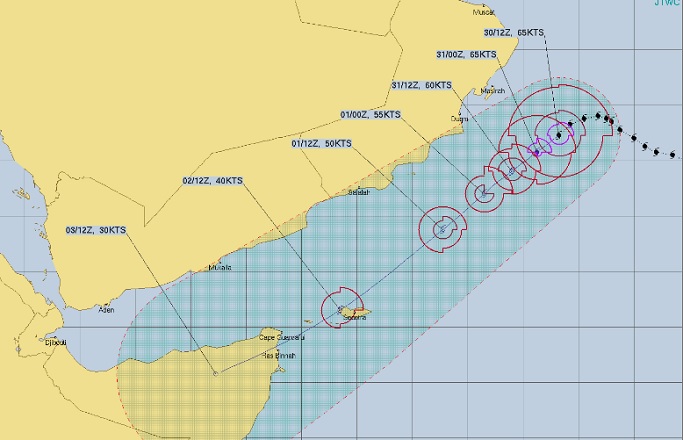 Forecasters are calling for Tropical Cyclone Kyarr, now spinning in the Arabian Sea, to travel the southern edge of the Gulf of Aden before making landfall on the Horn of Africa.

That’s posing a wind and potential flooding threat to Puntland and Somaliland, with rains pushing into Ethiopia and Kenya once the storm moves inland. Kyarr is expected to arrive on the coast on Sunday, according to the Joint Typhoon Warning Center.

Kyarr has weakened and currently has wind speeds of 110 to 120 kilometers per hour, with gusts to 135 km/h, the Regional Specialized Meteorological Center (RSMC) in India said in its latest update. The storm affected the Arabian Sea, with cities from Pakistan to Oman and the United Arab Emirates reporting coastal flooding from the high seas.

The storm’s dip south means it’s expected to target the ecologically sensitive Socotra Islands before arriving on the Horn of Africa. The storm’s winds will have further weakened by then, but Kyarr – the strongest storm in the region since 2007 – is still expected to bring impacts.

“Strong winds associated with the tropical storm might lead to destruction of weak structures,” warned the Food and Agricultural Organization (FAO) of the United Nations. “The cyclone is going to affect the Puntland shipping line thus disrupting water transport in that area. Flash floods may also occur in some areas.”

The region is already dealing with heavy rains in recent weeks, with some 182,000 people displaced by floods that proved fatal in parts of Somalia, according to UN humanitarian aid agencies.