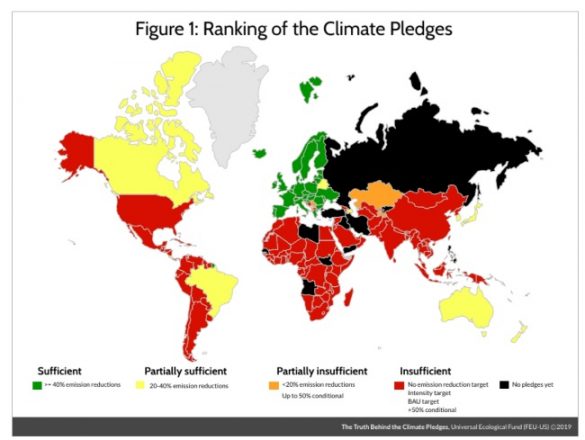 Morocco has increased its climate change commitments linked to the 2015 Paris Agreement. Eritrea and Benin have decreased theirs, and they represent half of just six nations globally that have reviewed these commitments since – commitments that aren’t delivering fast enough on climate action.

That’s according to a report released Tuesday, authored by four current and former members of the Intergovernmental Panel on Climate Change working groups, as well as the executive director of the Fundacion Ecologica Universal organization based in Argentina and the United States.

The analysis of 184 countries and their climate pledges found that barely 20 percent of national commitments are considered sufficient. None of those nations are on the African continent, where the reliance on slow-to-materialize international funding to achieve climate goals threatens success in holding global warming to the 1.5˚C target needed to avoid the worst effects of climate change.

Governments must “double or triple their current pledges within the next decade by transitioning to a low-carbon economy, reducing deforestation and reducing emissions,” the authors said.

Other barriers, in Africa and beyond, include the conditional nature of the commitments, which is tied to financing. For example, Seychelles, while a comparatively wealthy country, made its climate pledges entirely conditional.

Meanwhile, Angola, Libya, Senegal and South Sudan have yet to submit climate pledges at all.

“Based on our meticulous analysis of the climate pledges, it is naïve to expect current government efforts to substantially slow climate change,” concludes Dr. James McCarthy, an oceanography professor at Harvard University and a coauthor of the report. “Failing to reduce emissions drastically and rapidly will result in an environmental and economic disaster from human-induced climate change.”

The complete report, called “The Truth Behind the Climate Pledges,” is available here.