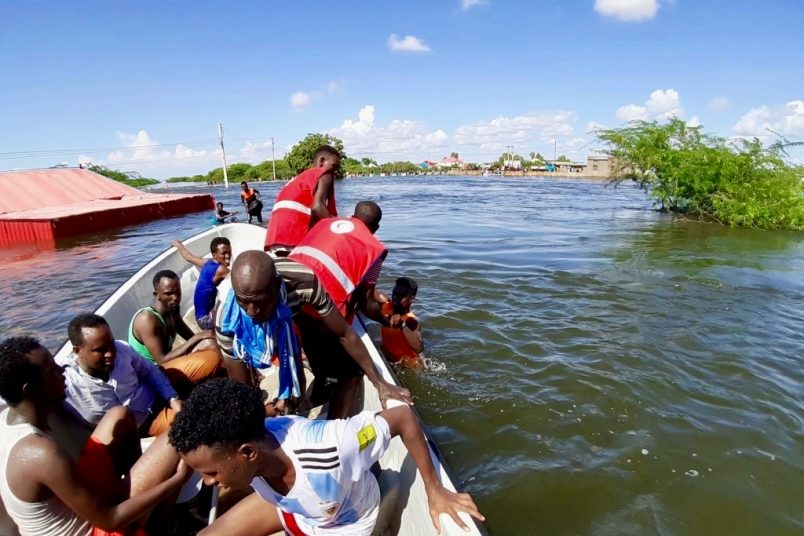 Recent flooding has brought disaster to parts of Somalia, with heavy Deyr-season rains sending the Shabelle and Juba rivers over their banks and forcing some 273,000 people from their homes in the southern part of the nation. That’s raised fears of malaria and other disease outbreaks in the affected regions.

Among the hardest-hit communities is Belet Weyne, where 85 percent of the town was inundated, according to the Somali Red Crescent Society (SRCS). The floods left at least seven people dead.

“These floods have already cost lives and our concern is that another fatal disaster is on its way,” said Abdi Abdullahi, head of SRCS in Belet Weyne. “Thousands are living in the open and outbreaks of disease can easily take hold. The main hospital in the area is flooded and many are cut off from our clinic.”

The SRCS said it is working closely with other humanitarian aid organizations to provide mosquito nets, water purification tablets and other necessities to residents. These include sandbags distributed in parts of Somalia where flooding still is expected.

Heavy rains in Somalia and the Ethiopian highlands caused the widespread flooding in late October, with more rain expected in the coming weeks.

“We are on high alert, but much more will be needed, especially clean water and sanitation, to prevent people from falling ill,” warned SRCS president Yusuf Hassan Mohamed. “We are racing to scale-up our response, but the floods have made it impossible to bring relief and medical supplies in by air to Belet Weyne and many areas are hard to reach.”