Home>Commentary>The Morales departure in Bolivia: A familiar story for many Africans
By Laureen Fagan - 11 November 2019 at 10:12 pm 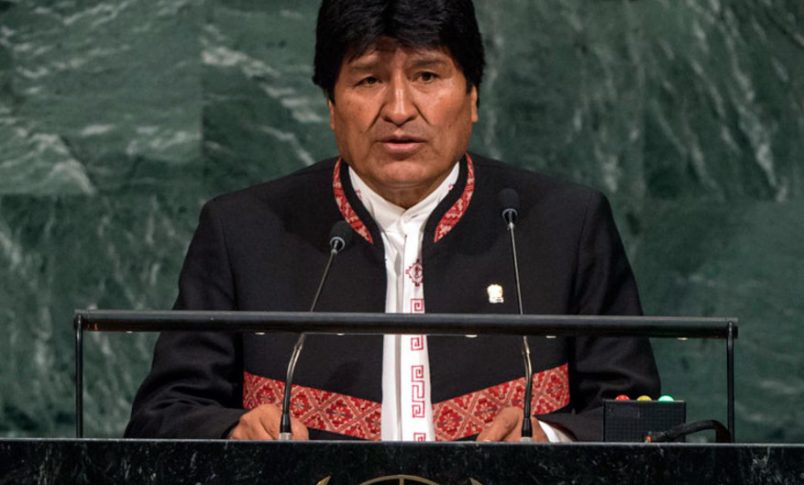 Embattled President Evo Morales has stepped down in Bolivia, where the dramatic developments since the country’s October 20 election have implications for the wider Global South – among them Africans concerned about the competing narratives emerging from the small but resource-rich nation.

“The coup plotters who raided my house and my sister’s house, set fire to homes, threatened the death of ministers and their children and vexed a mayor, now lie and try to blame us for the chaos and violence they have caused,” said Morales on Monday, a day after he announced his departure.

“Bolivia and the world witness the coup,” he added. And indeed, some African organizations have been quick to support the longtime Bolivian leader. Politically left-aligned groups including South Africa’s largest trade union, led by Irvin Jim, have denounced the political attack on Morales. So have members of the Venezuelan government and its ambassadors in South Africa and Angola, and a Cuba-affiliated group operating in The Gambia and Mozambique.

“The change process belongs to the Bolivian people,” Morales said last week. “We are not alone, more than 90 countries support our victory in the elections.” He did not name them, but support for Morales has come from Latin American neighbors, including Mexico, as well as global foreign powers like Russia.

“The wave of violence unleashed by the opposition did not allow the completion of the presidential mandate of E. Morales,” said Russia’s foreign ministry on Monday, calling Bolivia a friend and expressing concern over the chaos sweeping across the country. Socialist Alexis Tsipras, who served as prime minister of Greece until July, warned of a return to “the dark days of coups d’état and violence.”

Tsipras signed off with “may democracy win,” but the election Morales believes he won remains at the heart of the crisis. Despite a 2016 referendum vote on term limits that prevented Morales from seeking a fourth term, he did so after the country’s highest electoral court overturned the outcome. That paved the way for Morales – in office since 2006 as the South American continent’s longest-running leader – and his Movement for Socialism (MAS) party to compete with main rival Carlos Mesa.

Mesa, a former Bolivian president running on a new Citizen’s Community Alliance (CC) ticket, took 36.5 percent of the vote to Morales’ 47.1 percent, according to the OEP, Bolivia’s electoral commission. The OEP said Morales met the 10 percent threshold for an outright win without a second-round runoff and announced the victory on October 25, touching off escalating rounds of protests that led to fatalities.

Five days later, the Organization of American States (OAS) agreed to audit the election results after allegations of fraud. A team of 36 experts from 18 countries determined that in the four areas they were tasked with reviewing, including the IT systems and the integrity of tally sheets and chain of custody, there were irregularities they say ranged from “very serious” to indicative of something wrong.

”The manipulations of the IT system are of such magnitude that they should be investigated in depth by the Bolivian State in order to get to the bottom of them and determine who is responsible for such a serious situation,” the OAS said in a report released Sunday. “The existence of physically altered tally sheets and forged signatures also undermines the integrity of the official count.”

It was the OAS conclusion that Morales never reached the 10 percent threshold needed for an outright win. They  recommended new and credible presidential elections, to which Morales agreed, but the deteriorating political stituation ultimately prompted him to flee.

‘A setback for the entire continent’

Mexico’s government extended asylum to some 20 Morales-aligned politicians at its embassy in La Paz, and foreign minister Marcelo Ebrard made clear that Mexico would extend asylum to Morales too. “We defend freedoms and demand respect for constitutional order and democracy in Bolivia. The coup that occurred yesterday represents a setback for the entire continent,” said Mexican President Andrés Manuel López Obrador.

What had been speculation became reality as Morales confirmed he was boarding for Mexico, late Monday local time.

Bolivian media reports said some countries, including Argentina, Brazil, Chile and Peru, have closed their airspace to fly Morales out. Argentinian foreign minister Jorge Faurie on Monday denied there was any coup because Bolivian security forces were not in control, even as Argentina’s president-elect Alberto Fernandez – winner of elections just two weeks ago that put the left back in power – pledged his total support for Morales while condemning what he believes is a Bolivian coup.

For many African observers, the Morales departure is just as conflicting as it is for their Global South partners across the Atlantic. The 60-year-old Morales, Bolivia’s first indigenous leader, consistently condemns Western interference, whether it is manifested in the corporations extracting its mining resources at the expense of its own people or by governments imposing their will in defiance of Bolivian sovereignty. More than one analyst insists that Morales is the victim of another United States-led orchestration of regime change in Latin America, comparing it with Libya and other African nations.

On the other hand, many Africans – in Algeria, in Cameroon, in Zimbabwe – know well the story of presidents who refuse to leave after constitutionally mandated terms and the elections manipulated to protect them in defiance of the will of the people.  There are two narratives at work in Bolivia, too, leading to the same violence that Guinea Bissau, Burundi and far too many African nations have known. As Africans watch developments in Bolivia with a keen eye, many see echoes of their own experience while anticipating how Morales’ departure will shape his nation, the international community and their own interests.