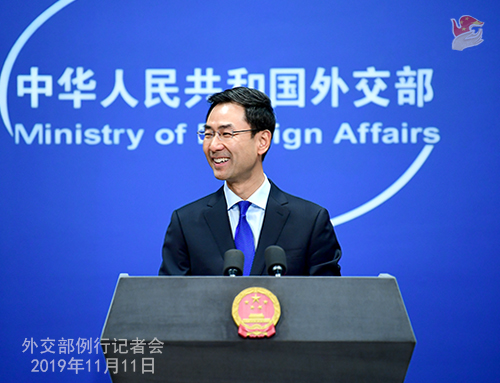 China delivered a blistering retort on Monday to new remarks about spying at the African Union headquarters in Addis Ababa, a claim that has circulated in recent years but was recently referenced by a U.S. official seeking to persuade nations not to use China’s Huawei firm and its equipment.

Spokesman Geng Shuang of the Chinese Ministry of Foreign Affairs called the remark by top U.S. tech chief Michael Kratsios “nothing but fake news cooked by Western media” that is “thrown into the dustbin by our African friends.”

Kratsios made the remarks last week at the Web Summit 2019 in Lisbon, Portugal, in a speech media outlets described as highly political. Geng noted the AU and numerous African heads of state have dismissed the spying claims. They came after a January 2018 Le Monde investigation that, citing unnamed AU sources, said from 2012 through 2017, data from the AU headquarters – built by the Chinese as a gift, including the digital systems – was routinely monitored by the Chinese.

China and Africa are good friends, partners and brothers,” Geng said. “Many African leaders have commended the practical, efficient and fruitful China-Africa cooperation and lauded China as the most trustworthy partner for Africa’s development and revitalization on such occasions as the FOCAC and the UN.

“We hope the U.S. will correct its mindset and look at China-Africa cooperation in an objective and unbiased manner,” he added. “Fabricating lies to slander others will only harm its own credibility and bring disgrace to itself.”