Home>Politics & Policy>UN reaffirms support as Machar, IGAD envoy meet over South Sudan deal
By AT editor - 13 November 2019 at 4:30 am 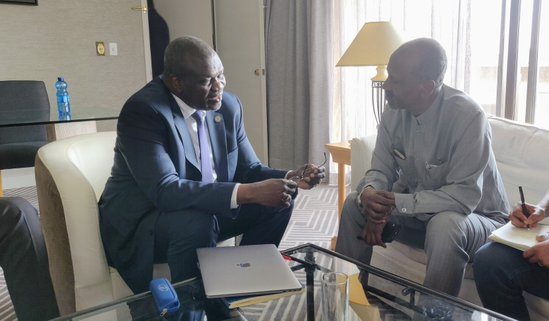 Tuesday was the target date for South Sudan’s President Salva Kiir and opposition leader Riek Machar to have formed a unified transitional government, but that’s been delayed for 100 days – and that decision is welcomed by the United Nations.

UN Secretary General António Guterres, in a statement released through his spokesman, “urges the parties to use this extension to make further progress on critical benchmarks, including security arrangements and the number and boundaries of states.”

The extension was decided last week in Uganda during talks led by the regional Intergovernmental Authority on Development (IGAD). The deal is meant to end conflict that’s continued since 2013 and claimed an estimated 400,000 lives.

While Kiir previously appealed for more time – a six-month extension was approved in May – it’s Machar who has said the opposition won’t honor the agreement and civil war will continue unless the sticking point of reunification of military forces is resolved.

The issue of establishing borders also remains a barrier to achieving the goals of the South Sudan agreement, according to UNMISS, the UN mission in South Sudan.

“As IGAD has underscored, face-to-face meetings of the leadership of the parties will continue to be crucial in maintaining momentum,” the Guterres statement said. “The Secretary General reaffirms the critical importance of the role of IGAD and the African Union in the political process, and the continued readiness of the United Nations to support their efforts.”