Home>In Depth>Global Coalition on ISIS turns to West Africa, wrestles with Syria
By AT editor - 14 November 2019 at 9:51 pm 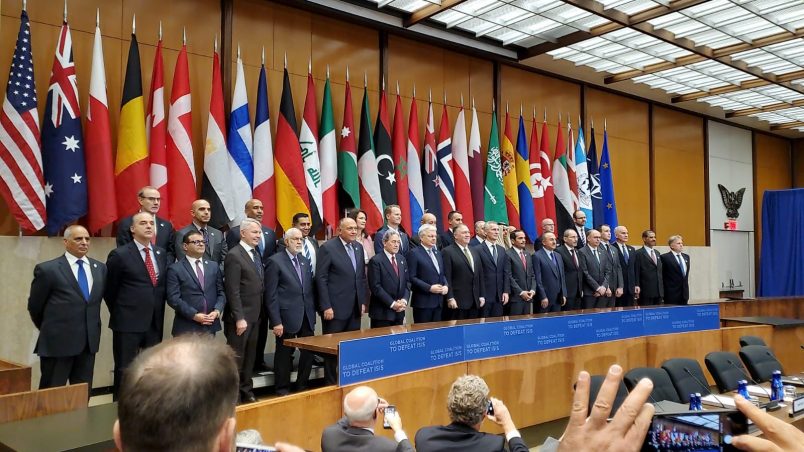 The Global Coalition Against ISIS, meeting in the United States, said its focus is shifting to West Africa now that Islamic State – according to U.S. Secretary of State Mike Pompeo – has been “defeated” in Syria and Iraq.

“We agreed at the working level that West Africa and the Sahel would be a preferred initial area of focus for the Coalition outside of the ISIS core space – and with good reason,” Pompeo said in his press remarks before Thursday’s closed session.

“ISIS is outpacing the ability of regional governments and international partners to address that threat. We’re planning a Coalition meeting that will focus on specific support that partners can provide across that region.”

Pompeo also stressed an imperative for coalition members to “take back the thousands of foreign terrorist fighters in custody and impose accountability for the atrocities that they have perpetrated.”

High-level representatives from Morocco, Tunisia, Libya and Egypt also were on hand, including Egyptian foreign minister Sameh Shoukry. They were joined by European counterparts including French minister Jean-Yves Le Drian, whose government has committed troops in the Sahel for years and this week agreed to assist Congolese President Felix Tshisekedi with security concerns in the country’s east.

Also on hand were Turkey, Qatar and other Gulf-state members, as well as NATO secretary general Jens Stoltenberg.

“We also agree on the need to continue to build the capacity of partner forces to strengthen the resilience against terrorism,” said Stoltenberg. “NATO is also helping other countries, such as Jordan and Tunisia, build their local counterterrorism capacity, because prevention is better than intervention and building local capacity is one of the best tools we have in our common fight against terrorism.”

While the Global Coalition made clear its priorities on Africa, it remained focused on recent developments in Syria following U.S. President Donald Trump’s October withdrawal of troops in the country’s north and the death of Islamic State leader Abu Bakr al-Baghdadi. The U.S. was fighting Islamic State alongside Kurdish communities at Turkey’s southern border, but intended to reposition those troops in western Iraq as Syria and Russia assume control of the region. The decision also called the U.S. relationship with NATO partner Turkey into question.

“All NATO allies are part of the Global Coalition to Defeat ISIS,” said Stoltenberg, calling the situation in Syria both fragile and difficult.. “It is well known that there are differences between NATO allies when it comes to the situation there, but at the same time we agree on the need to safeguard the gains we have made against our common enemy, ISIS, and to support UN-led efforts to achieve a sustainable political solution.”

Le Drian, according to the French government, intended to make clear that any “unilateral initiative” that might jeopardize the progress against Islamic State in Syria must be avoided and all Global Coalition partners must maintain a united front, coordinating their efforts to ensure ISIS remains neutralized.

Le Drian, the government added, also presented “France’s position with respect to the refusal to lend any support to the reconstruction of territory under the control of the Syrian regime or to the forced relocation of Syrian refugees.”

France hosted a meeting in June for Global Coalition political leaders that included representatives from Mali and Burkina Faso, where the violent attacks of Islamic extremists continue to escalate. Just last week, cells of the Islamic State-West African Province (ISWAP) in Mali and Burkina Faso announced their allegiance to al-Baghdadi’s replacement, who uses the name Abu Ibrahim al-Hashimi al-Qurashi.

Their decision underscores the Coalition concern that although the physical “caliphate” claimed by Islamic State in Syria and Iraq was declared defeated in March, its followers have the potential to emerge elsewhere. “The territorial defeat is achieved, but the job to ensure a lasting defeat of Daesh/ISIS is still to be done,” said the Paris participants.

Wilayat Sinai, an Islamic State affiliate operating in Egypt since 2011, also has pledged allegiance to al-Qurashi, as have fighters from several groups in Tunisia and Somalia.