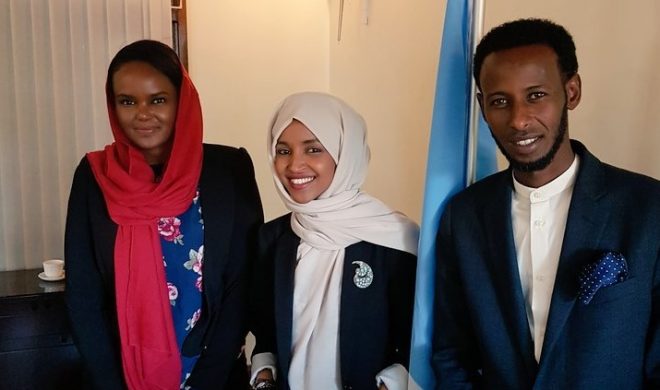 Services will be held Friday for Almaas Elman, the Somali-Canadian human rights activists and former diplomat killed earlier this week in Mogadishu when she was shot by unknown assailants.

Ilwad Elman, the prominent sister of Almaas, announced Thursday that “we will lay my sister to rest” during Friday prayers at the Isbahaysiga Mosque in the Somali capital.

“Thank you for all of the love,” said Ilwad, responding to the outpouring of international support that followed the news of her sister’s death.

Both sisters are the daughters of Elman Ali Ahmed, who founded the Elman Peace organization in 1990 as conflict in Somalia escalated. He was assassinated in 1996, leaving his wife and daughters to continue the mission. Ilwad Elman was considered for this year’s Nobel Peace Prize, which ultimately was awarded to Ethiopian President Abiy Ahmed.

Almaas, left, shown here with Somali-American lawmaker Ilhan Omar and Ahmed Hersi in 2016, also served at the Somali embassy in Kenya. The Somali government “strongly condemned” the murder of Almaas in a statement, and said it “vows to the public that the government (is) currently conducting a full investigation into the killing to bring those responsible to justice.”

Canada’s former Minister of Immigration, Refugees and Citizenship, who now serves in a different capacity, also expressed his condolences.

“Canadian humanitarian workers put themselves at risk around the world to help others,” said Ahmed Hussen. “This is why I’m truly saddened by the death of Almaas Elman, a Somali Canadian human rights worker who was killed in Mogadishu. I extend my prayers to the Elman family.”