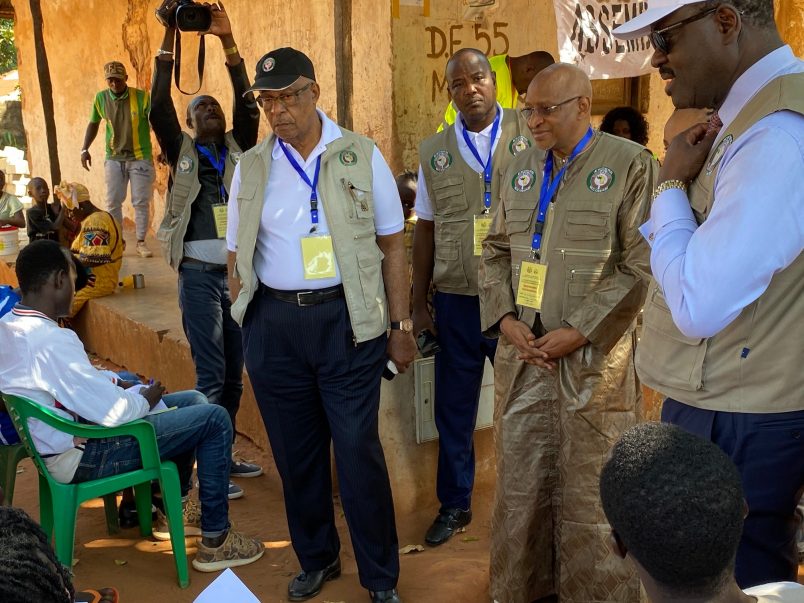 The results show that Domingos Simões Pereira , the African Independence Party of Guinea and Cape Verde (PAIGC) candidate, came out on top with 40.1 percent of votes cast. He was followed in second place by Úmaro Sissoco Embaló, the Movement for Alternative Democracy (MADEM G-15) hopeful, who received 27.7 percent of the vote. The two will compete in a runoff election on December 29.

The results put Vaz in fourth place with just 68,933 votes, or 12.4 percent of the 566,473 ballots cast on Sunday. Almost three-fourths of the nation’s registered voters participated in the election in what electoral commission chief José Pedro Sambú promised would be a smooth and peaceful process.

Indeed, there were no immediate reports of unrest at the polls or following the results announcement. Yet in recent days the Vaz campaign has accused PAIGC of voter fraud and warned that the now-outgoing president will not accept results compromised by the opposition’s alleged corruption.

International observers, particularly from the African Union (AU) and the 15-nation ECOWAS regional body, are closely watching developments as they complete their electoral observer missions. The AU, in a statement released Tuesday, said it found only minor irregularities in an otherwise successful election but also cautioned that its role was necessary because “this election was conducted within a context of political tension and institutional crises which drew the attention of the international community.”

Those tensions date to 2012, the AU said, describing as “remarkable” the internal political cleavages of the nation. By 2015, the Vaz split with Pereira – his former prime minister – led to the dissolution of his government and bitter divisions within the main PAIGC party. In fact, both runoff candidates now vying for the presidential office have previously served as prime minister under Vaz, with Embaló holding the office from 2016 to 2018.

Their respective tenures occurred during a period that saw Vaz repeatedly upend the Guinea Bissau government. As recently as three weeks ago, the president was forced to reinstate Prime Minister Aristides Gomes, who he had replaced with Faustino Imbali in October in violation of the country’s constitution. It was the latest evidence of the instability of the Vaz administration, which has held power since 2014.

The upheaval has resulted in cycles of violence that re-emerged during the October switch, prompting the United Nations Security Council and other international bodies to speak out. The Security Council, mindful of the country’s history of political coups, urged “defense and security forces of Guinea-Bissau to continue to maintain strict neutrality throughout and beyond the electoral and political processes.”

It is ECOWAS, however, that has long been responsible for ensuring Vaz and the nation comply with constitutional requirements and the Conakry Agreement, a roadmap for resolving the political dispute. That agreement helped to ensure that parliamentary elections were held in March, but – as ECOWAS noted in its own statement released Tuesday – that polling success failed to end the political impasse.

ECOWAS, working closely with the AU, the Community of Portuguese Speaking Countries (CPLP) and other international partners, said it too found the Guinea Bissau presidential election relatively smooth.

“The shortcomings identified during the conduct of the election are not likely to undermine the credibility of the presidential election,” said ECOWAS, referring to a handful of instances in which indelible inks were of poor quality for voters, or there was confusion over missing voter-register names.

That doesn’t necessarily mean that Guinea Bissau can rest ahead of the December runoff election, though, especially if the Vaz camp resists the election outcome. ECOWAS encouraged all candidates to accept the credible results and “urges the election management bodies (EMBs) to approach the final phases of the process with fairness, openness and transparency.”

It’s possible if not likely that tensions may rise and ECOWAS doubled the number of troops placed in Guinea Bissau to a force of 1,000 at the beginning of November. The standby force will remain as a deterrent to “all challenges” to the election results, including the possibility of a Vaz-aligned military coup.

ECOWAS also has said it remains focused on the country’s role in the illegal drug trade, and what it called “the connection with the political circle” in Guinea Bissau. Two large drug seizures this year, both of them involving massive amounts of cocaine, underscored a problem that has been ignored by authorities since emerging in 2005.

“For most observers the surprise was not that a big shipment of drugs was passing through the country, but that the police stopped it,” said The Economist, following the September arrests. “UN officials warned more than a decade ago that the country risked becoming a ‘narco-state.’ The drugs trade has only become more embedded since then.”

It’s a battle Vaz often said was a priority, but the cocaine flows and corruption have continued as the nation’s citizens continue to struggle in poverty. Now voters in Guinea Bissau have made clear they want change. It remains to be seen how, and when, they will achieve it.