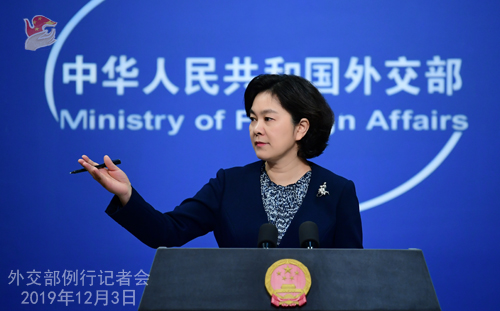 The Chinese government took a forceful position against the United States on Tuesday, denying the claims of U.S. Secretary of State Mike Pompeo and his warnings against trusting Beijing or the Huawei firm in Europe or in Africa.

“The company, based in Shenzhen, maintains links to the Chinese People’s Liberation Army,” Pompeo wrote in a piece published Monday by Politico. “It is implicated in espionage in the Czech Republic, Poland and the Netherlands, has allegedly stolen intellectual property from foreign competitors in Germany, Israel, the United Kingdom and the United States, and is accused of bribery and corrupt practices in countries like Algeria, Belgium and Sierra Leone.”

Hua Chunying, spokeswoman for China’s Ministry of Foreign Affairs, refuted those claims during the ministry’s daily press conference. “So far, not a single country, company or individual can present conclusive evidence to prove that Huawei poses a security threat,” she said. This time, Hua added that it is actually the U.S. citizens who have no privacy because of legal and technical realities, and the U.S. that is suspect in its foreign affairs.

As the COP25 climate conference gets under way in Madrid, China also took the U.S. to task for its retreat from international agreements, despite the efforts of U.S. lawmaker Nancy Pelosi, the Democratic leader of the House of Representatives who assured the world that Americans remain committed to the Paris Agreement goals.

“The U.S. has become addicted to withdrawing from commitments. It has pulled out of international organizations including UNESCO and UNHRC. It has also withdrawn from international treaties like the Paris Agreement, the JCPOA and the INF,” Hua said.

“Many world leaders have exclaimed that as the world is challenged by unilateralism, it is good to have China on the side of multilateralism and international rules.”