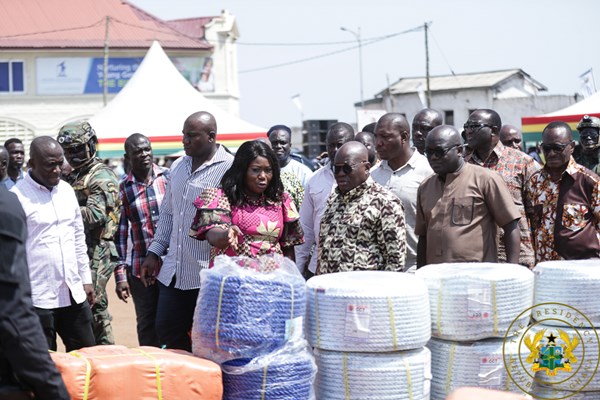 Ghanaian President Nana Akufo Addo delivered thousands of outboard motors and other fishing gear to the country’s coastal residents on Tuesday, while encouraging them to end illegal practices and pursue a sustainable industry.

Akufo Addo, along with other agency leaders including fisheries minister Elizabeth Afoley Quaye, made the presentation during a three-day tour of the West African nation’s coastal regions, which rely heavily on the ocean economy.

The 6,336 motors are among 10,000 made available at subsidized prices to fishing communities. The government also is investing in more ovens, cold storage facilities and related equipment.

He noted that traditional leaders have asked for extensions of the “closed season” to better balance how Ghana’s fishers – both artisanal and trawler crews – are protecting their resources.

“I will also like to ask that you also put a stop to the practice of light fishing,” the president said, referring to an illegal night-fishing practice. “This way, we will really be able to see some progress.”

Ghana is among the nations hit hardest by illegal, unreported and unregulated (IUU) fishing practices. A report earlier this year from the Environmental Justice Foundation found that some US$50 million was tied up in the illegal practice of saiko, in which trawlers linked to Chinese interests transfer their catch to artisanal fishers, essentially cutting them out of the their own livelihoods and discouraging adoption of their own sustainable practices.

“Around 200 coastal villages in Ghana, and over 10 percent of the population, depend on marine fisheries for their income. Should the resource disappear, mass migration, higher food prices and social upheaval along the coast can be considered a very real prospect,” the report warned.