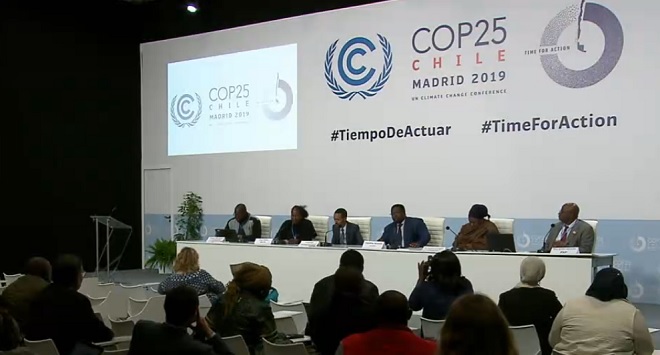 Leading climate activists with the Pan-African Climate Justice Alliance presented the continent’s concerns during a COP25 panel discussion in Madrid on Tuesday, underscoring the priority that Africa must be during climate negotiations.

Eugene Nforngwa, the Cameroonian environmental journalist and development specialist, led the panel of five African leaders calling on the global community to honor the adaptation and other needs of the continent.

“It is not just about the vulnerability of Africa,” said Augustine Njamnshi, the coordinator for the African Coalition for Sustainable Energy and Access (ACSEA). He stressed the need for African nations to be able to recover from climate impacts rather than simply prepare for their potential. The continent, according to scientists, is likely to see temperature rises that exceed other parts of the globe.

“Africa’s even warming faster than we thought,” he said. That’s why, at COP24 in Poland last year, the African group of negotiators pressed for the continent’s special needs to be considered.

He placed responsibility squarely on the developed world, while Nforngwa made clear that the financial commitment and support for Africans also hasn’t happened. He wasn’t alone.

“What we are calling for is fulfillment of the previous climate commitment and the pre-2020 commitment, the $100 billion a year goal,” said Fazal Issa Abdul, executive director of the Sokoine Foundation based in Tanzania. That commitment should be extended to meet the needs of the developing world.

A video of their 30-minute session is available here.