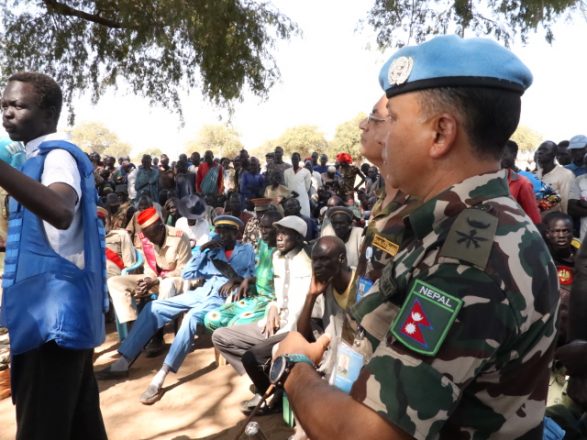 The United Nations mission in South Sudan said Tuesday it is sending 75 Nepalese peacekeepers to the Western Lakes region of the country because of continued violence, despite a peace agreement marked by slow implementation and its history of past failures.

The decision followed reports that some 80 people have died and more than 100 were injured in clashes between the Gak and Manuer communities, roughly 100 kilometers north of Rumbek. Peacekeepers and their equipment were flown into the region because roads have been destroyed by the heavy rains impacting a number of African nations, including Somalia and Kenya.

“This fighting must stop,” said UNMISS chief David Shearer. “We are urging the communities involved and their leaders to put an end to the violence and to come together in reconciliation and peace for the good of their people.”

UNMISS notes that the violence that devastated South Sudan since civil war broke out in 2013 – one that claimed an estimated 400,000 lives – has subsided. Yet “intercommunal clashes continue to result in the killing and injuring of civilians, cattle raiding and the looting of property,” UNMISS said.

South Sudan’s President Salva Kiir and opposition leader Riek Machar, whose clashes touched off the country’s tragic divisions, have promised to form a unified transitional government as part of the peace deal. The deadline for moving forward was last month but was delayed for 100 days, as Machar warned the opposition won’t honor the agreement and civil war will continue unless final issues are resolved.

In addition to peacekeeping troops, UNMISS says it is coordinating mediation talks in the affected communities.

“We shall live peacefully with them. Go and tell them that,” said Chief Manyiel Lieny of the Gak community to UNMISS personnel visiting the region.