Home>News>Intensifying Cyclone Belna heads for Madagascar
By AT editor - 8 December 2019 at 5:53 am 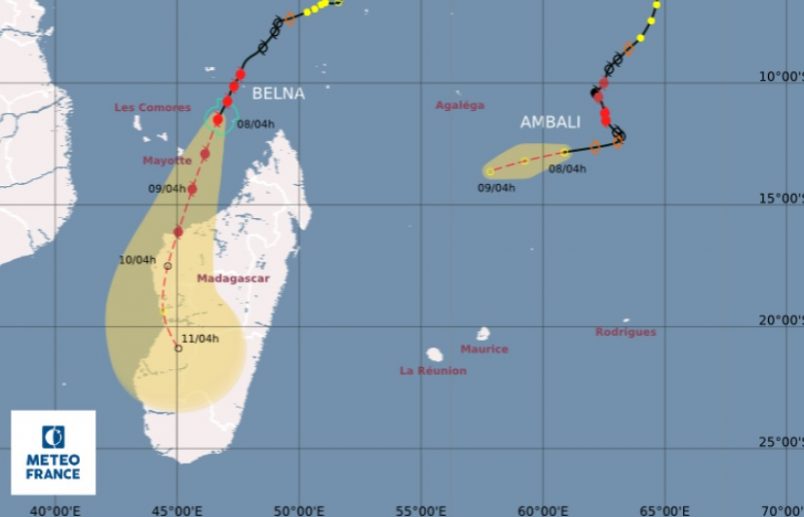 A tropical cyclone threading its way into the Mozambique Channel has intensified into a major storm with winds of 185 kilometers per hour as it heads toward possible landfall in northern Madagascar.

Cyclone Belna still has time to grow stronger, according to Météo France Reunion, the regional authority for cyclones in the southwest Indian Ocean. While the storm’s power is likely to intensify, there’s less confidence about the forecast track, according to the French agency as well as the Joint Typhoon Warning Center.

As of early Sunday, Madagascar’s northwest coast remained a target and local authorities maintained a “green” warning level for the country. While the track remains imprecise, citizens are advised to prepare and monitor updates.

Mayotte residents were placed under an orange-alert status on Saturday, although Météo France said Cyclone Belna remained a compact storm with the strongest winds staying within a 70-kilometer radius of a small eye, and remained optimistic that the worst of the storm impacts would remain offshore for Mayotte.

The storm was making a direct hit on the uninhabited Glorious Islands, a tiny French-held archipelago about 250 kilometers northwest of Antsiranana, the capital of Madagascar’s Diana province.

Both the French and U.S. agencies expect a landfall further south in Madagascar, likely on Monday or Tuesday. Meteorologists also are keeping a close eye on Ambali, a second tropical storm that is not expected to become a threat at this time.

The storms follow the arrival of Pawan on Somalia’s coast on Friday. United Nations agencies there reported new storm damage, along with flash flooding from heavy rains.