Home>SECURITY>Libya's Haftar warns 'Zero Hour' has come for Tripoli
By Laureen Fagan - 13 December 2019 at 6:06 am 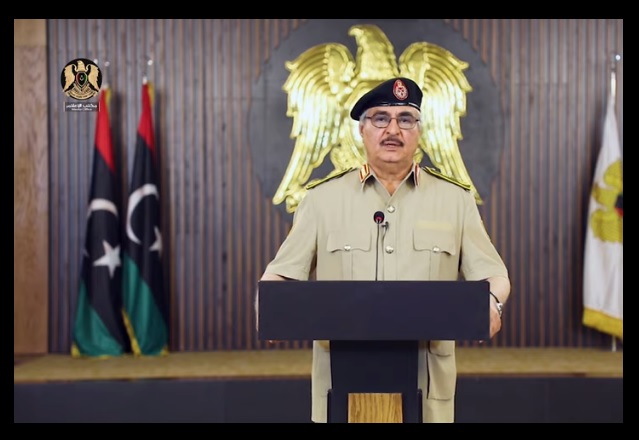 Libyan military leader Gen. Khalifa Haftar announced on Thursday that “Zero Hour” has come for Tripoli, heralding an intense offensive to take the city in a message similar to the one used in April when renewed fighting there first began.

Haftar, head of the Libyan National Army (LNA), made the statement during a video speech released by the LNA’s General Command Information Office. He railed against the internationally recognized Government of National Accord (GNA) led by Fayez Al-Sarraj and called Tripoli “a den of criminals” in which Libyans suffer because of the fighting and violence.

Haftar’s five-minute speech reflected his contempt for the GNA and the “traitors” he says have relinquished Libyan sovereignty to international actors, by implementing “the orders of their masters” and selling out the country.

Western diplomats began to gather in Janzour in order to leave by sea, sources told Al Arabiya news, although there was no additional confirmation of evacuations. Speaking Thursday at a Washington D.C. briefing, U.S. Secretary of State Mike Pompeo – asked about Libya and the recent downing of a U.S. drone – stressed the importance of political and diplomatic processes.

“There’s no military solution to this.  There’s no – there’s no capacity for any of the forces that are competing there to resolve this in a way that they can create victory on the battlefield that leads to a political resolution that has stability,” Pompeo said. “It’s just – there’s no one that I’ve spoken to in Europe, in Russia, in the Middle East that believes that that’s possible.”

Haftar’s offensive on Tripoli and the GNA began on April 4 when he said he was moving against the terrorist militias operating in the region, defying United Nations officials facilitating a national dialogue that was set to begin ahead of long-postponed elections. Thousands have been displaced, killed and wounded in the fighting.