Home>SECURITY>Issoufou: Terrorists in Sahel are now 'real professionals in the art of war'
By AT editor - 16 December 2019 at 6:14 am 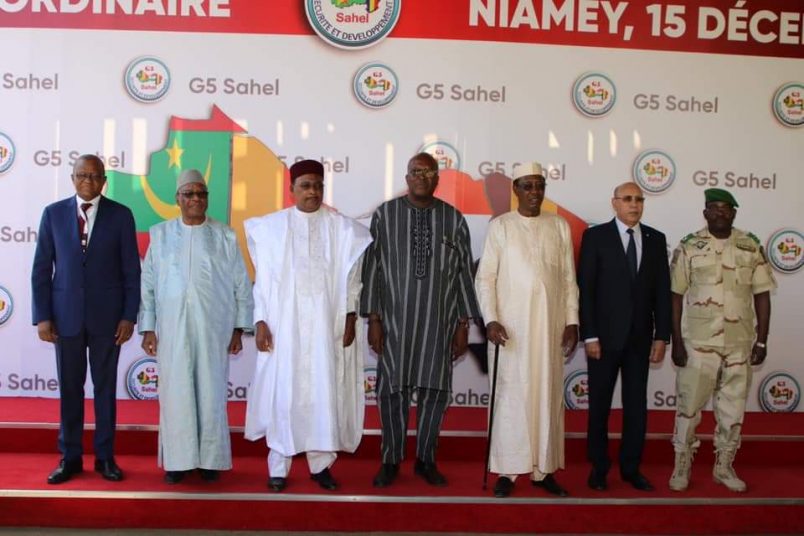 Leaders of the G5 Sahel nations meeting in Niamey this weekend vowed to continue their fight against extremists, while appealing to the international community for financing and support in the effort.

The extraordinary summit was hosted by President Mahamadou Issoufou of Niger, who welcomed his counterpart Roch Marc Christian Kaboré of Burkina Faso – the current leader in the G5 rotation – as well as Ibrahim Boubacar Keïta of Mali, Idriss Déby of Chad and Mauritania’s Mohamed Ould Cheikh El Ghazouani.

The summit was moved from Ouagadougou to Niamey following the deaths of more than 70 Nigerien forces in last week’s attack on a military camp in Inates. The G5 leaders paid tribute to Niger’s loss with a visit to the site and condemned what they called a barbaric attack, one in a series of recent terrorist actions affecting Mali, Burkina Faso and the region.

“The terrorists have become real professionals in the art of war,” said Issoufou. “While attacking our troops, terrorists also attack our alliances.”

The G5 leaders vowed to strengthen their response, particularly in shutting down the drug trafficking and the armed groups’ control over mining operations that finance and fuel Islamic State and other extremists. They also intend to recalibrate the security operations to adjust to the evolving threat in the Mali-Niger-Burkina Faso border region.

A subsequent meeting for G5 Sahel leaders, to be hosted by President Emmanuel Macron of France, has been postponed until January following the attacks in Niger. Macron plans to discuss France’s military commitment in the Sahel, which has come under criticism both at home and in the partner nations.

France lost 13 soldiers in late November when military helicopters crashed in Mali, near the borders with Niger and Burkina Faso.