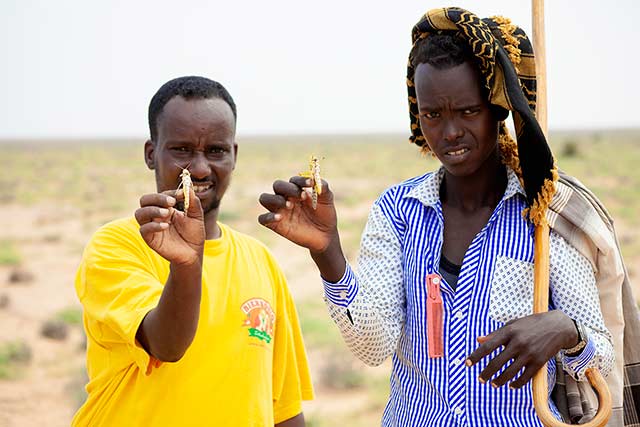 The desert locust outbreak in Somalia is far worse than anticipated, with significant crop damage in the eastern regions and threats to another 100,000 hectares expected over the next six months.

That’s according to an update Wednesday from the Food and Agriculture Organization of the United Nations, which said it was the worst outbreak in the region in more than 25 years.

“So far, the locust infestations have been confined to rangeland and grassland areas in Puntland and Somaliland,” the FAO said. “However once adults form immature swarms, there is a greater possibility that some swarms will migrate south towards the Ethiopian border area with southern Somalia.”

The locusts have already damaged crops and pasture across some 70,000 hectares, threatening food crops in areas hit hard by heavy rainfall from this month’s storm Pawan. The rain has created conditions in which the locusts thrive, with the potential for their spread into Djibouti, Eritrea and northeastern Kenya as well.

“Given the scale of the disaster, aerial spraying using airplanes would have been the ideal control measure,” said Etienne Peterschmitt, an FAO representative in Somalia. “However, security conditions in most parts of Somalia do not allow it.”

The FAO has been monitoring the threat following “unprecedented” breeding that happened earlier this year in Iran and Saudi Arabia. Mature locusts were then seen in Yemen, where they crossed into southern Eritrea, eastern Ethiopia and northern Somalia, as well as Egypt by the end of June.

A typical swarm can contain up to 150 million locusts per square kilometer and travel with the wind up to 150 kilometers per day, destroying food for thousands of people. When not managed properly, they can lead to complete crop losses.