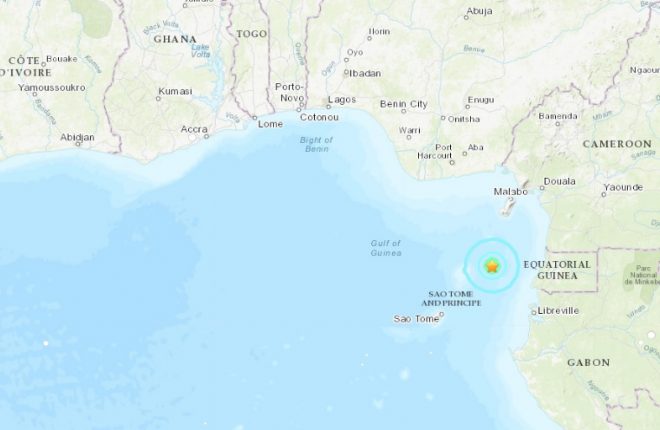 An unusual earthquake, at least for this region, happened Wednesday afternoon near the island nation of São Tomé and Príncipe, and was felt as far away as Cameroon and Gabon in mainland West Africa.

The 5.5-magnitude quake was centered some 90 kilometers east of Santo António island at a depth of 10 kilometers, according to the United States Geological Survey. That’s about 200 kilometers west of Equatorial Guinea and a similar distance to Libreville, the capital of Gabon.

Authorities on the island say there were no reports of injuries or damage, but local media said the island residents were surprised. “I have never felt such a thing,” said one.

The quake also was felt from the top floor of the United States Embassy in Yaounde, some 440 kilometers away, according to a witness report listed with the European-Mediterranean Seismological Centre.

In Gabon, the country’s environmental minister confirmed the quake was felt their too.

“We felt a small tremble in Libreville today at about 16:30,” said Lee White, Minister of Forests, Oceans, Environment and Climate Change. “It is very unusual and scared quite a few people but is nothing to worry about.”

The USGS listed reports from people who also felt the quake in Malabo. The capital of Equatorial Guinea is on the northern end of Bioko Island, some 227 kilometers to the north from the epicenter.