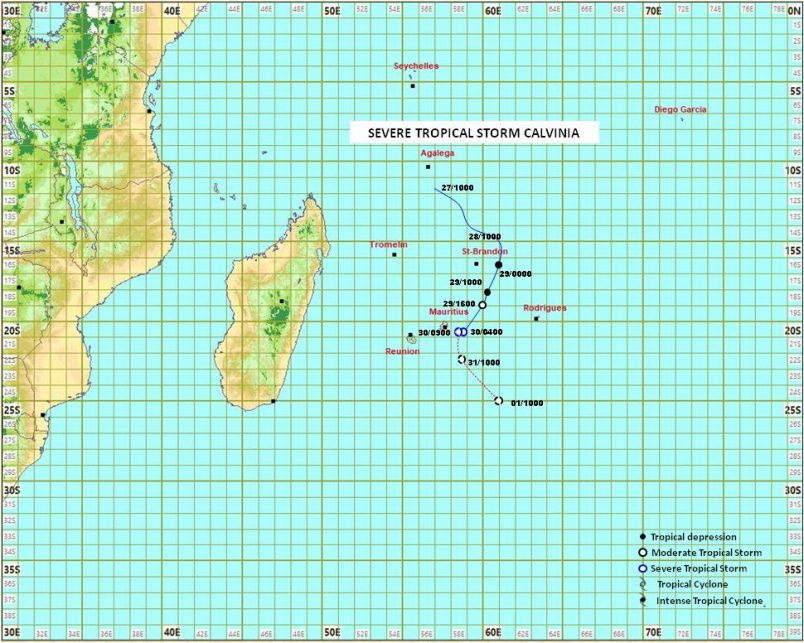 The government of Mauritius has placed the Indian Ocean island nation under a Class III warning as Tropical Cyclone Calvinia passes near the island, bringing with it rain, heavy winds and seas.

The latest advisory from the Mauritius Meteorological Services, issued at 1 a.m. Tuesday, put the center of the strengthening storm about 65 kilometers southeast of Blue Bay, a town on the southeast coast.

It was moving southwest at about 4 kilometers per hour and curving closer to the Mauritius coast.

Although Calvinia remains a compact storm and is not expected to make landfall on the island, wind gusts are reaching about 130 km/h within a radius of 40 km from the center. “A westward turn would bring the center of Mauritius closer and cyclonic conditions, that is, gusts of the order of 120 km/h, could be felt on the island,” said the agency. “As a result, Calvinia still represents a threat to Mauritius.”

A Class III warning is issued when winds at that threshold are expected.

Heavy rains are not likely to be severe but may cause localized flooding, and residents are advised to avoid rivers. The government also urged people to avoid sea travel until the storm passes and warnings are lifted.

Météo France on La Réunion island issued a pre-alert caution for its residents, with the potential for rain, wind and heavy waves, yet the forecast path for Calvinia remains uncertain. Most models show the storm turning sharply to the south once it passes Mauritius, according to the United States Joint Typhoon Warning Center, but there’s some question on how quickly the turn will occur and how far west it will move first.