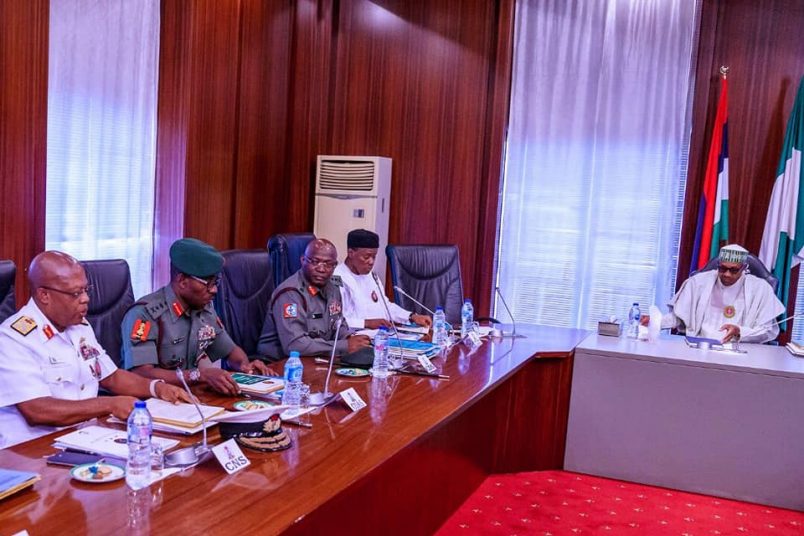 The Nigerian president’s announcement that he will not seek re-election at the end of his second term may put to rest the rumors that he’d be the next African leader pushing to extend his mandate. Yet it’s not likely to reduce the conflict Muhammadu Buhari faces with a fierce political opposition nor soften the edges on critical challenges confronting him in the remaining years of his tenure.

Buhari made clear his intentions during a New Year’s address in which he explicitly said he will not seek a third term in 2023, and does not intend to compete in future elections – apparently for any office.

“But I am determined to help strengthen the electoral process both in Nigeria and across the region, where several ECOWAS members go to the polls this year,” he added. Six countries in the West African regional body plan presidential elections in 2020, including Guinea where dark clouds loom following  President Alpha Condé’s decision last month to seek constitutional changes permitting a third term.

Yet the frequently ailing, 77-year-old Buhari denies that’s the case in Nigeria, despite claims advanced by People’s Democratic Party (PDP) leaders that Buhari and the All People’s Congress (APC) have an extended-term agenda. He’s also apparently still in denial over the continued security crisis in Nigeria.

After years of insisting that Nigerian defense forces are successfully meeting the extremist threat, there has for a decade been far too much evidence to the contrary. The latest plan to remove troops from troubled regions affected by criminal gangs, and turn them over to police and civilian authority, is already meeting with stiff resistance from the opposition and affected communities.

Military leaders who met with Buhari last week announced a pullback from Benue, Taraba and Nasarawa states – all to the southeast of Abuja, including parts of Nigeria’s border with Cameroon’s restive Northwest Anglophone territory. Nigerian military spokesman Onyema Nwachukwu told the press the mission to end banditry and communal violence in that region is largely complete, but that’s not sitting well with governors and local leaders who say they’re unprepared for the troop repositioning. The decision also comes as Chad pulls back its troops in Borno State, a northeastern Nigerian stronghold for Boko Haram extremists, with additional Nigerian troops likely to head there.

The PDP, led by unsuccessful presidential rival Atiku Abubakar, was quick to condemn Buhari on Sunday following what has been a series of particularly vicious recent attacks.  “The PDP blames the unabated killing and violence in various parts of the country on security lapses under the present administration as well as the manifest failure of President Buhari,” the party said. Their message came in response to last week’s massacre, which left 23 dead in the pastoralist village of Tawari in Kogi state.

Buhari countered on Saturday that there will be nothing “rushed” about the shift in Nigerian forces. In a statement responding to the concerns of local leaders, Buhari said his administration will not abandon citizens in need of protection.

“You don’t need to worry. We will not expose our people and their communities to harm or danger,” Buhari said. “The withdrawal is to allow the military to focus on its primary duty of defending the nation against external aggression. It is the duty of the police to handle internal security since Nigeria is not at war.”

Promises of peace but no end in sight

Nigerians, though, have become weary of the Buhari administration’s assurances. At Christmas, Nwachukwu told the nation that there was no longer any corner of Nigeria where Boko Haram still held territory. On Thursday, the leader of a Nigerian Christian organization went missing in an attack in Adamawa.

By Sunday, hostage Lawan Andimi was pleading for his release in a video Boko Haram claimed to produce.

That follows an attack just across the Nigerian border from Borno State in which at least 50 people were killed on a fishing island in Lake Chad. In late December, the affiliated Islamic State West African Province released a video of 11 Christians beheaded in what they say is retaliation for the October death of former Islamic State leader Abu Bakr al-Baghdadi. The victims were reportedly from Borno and Yobe states.

“We have been fighting on several fronts: violent extremists, cultists and organized criminal networks. It has not been easy. But as we are winning the war, we also look to the challenge of winning the peace, the reconstruction of lives, communities and markets,” Buhari said. He listed a number of economic development, energy and infrastructure challenges, and lamented that “power has been a problem for a generation.”

Corruption remains a thorn. Poverty remains prevalent. Diversification of the oil-dependent Nigerian economy remains a problem, no less so as the world moves toward a clean-energy climate future. Buhari will need to move toward regional and pan-African economic initiatives, like the African Continental Free Trade Area (AfCFTA) and the new ECOWAS currency, in a nation where protectionist views can be powerful.

But alongside these challenges, Nigeria has yet to convince its people that their security is achievable – and for good reason. Buhari may not run again in 2023, but neither can he run away from the crisis that remains.