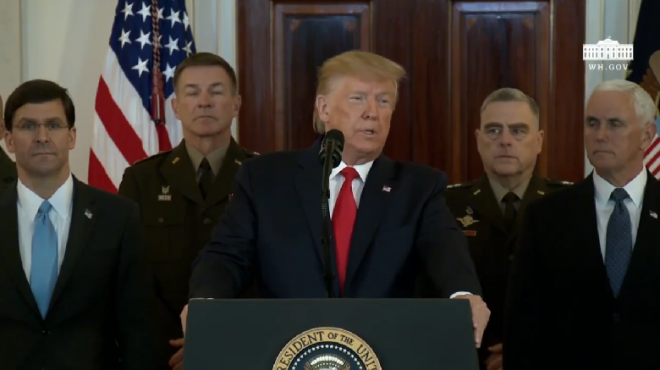 United States President Donald Trump said the U.S. will impose new and harsher sanctions on Iran following Tuesday night’s missile attacks on two military bases used by Americans in Iraq, while urging other nations to align with the U.S. position on Iran and its nuclear ambitions.

Trump said no U.S. or Iraqi personnel were injured in the attacks on the sprawling Al Asad airbase in Anbar province and a second site at Erbil. “All of our soldiers are safe,” he said, describing the damage to facilities and equipment as minimal.

Trump also said Iran appeared to be “standing down,” which is what the Iranian leadership promised if the U.S. did not retaliate against Tuesday’s nights operation. Iran said it conducted the bombing in response to last week’s targeting of top Gen. Qasem Soleimani, head of Iran’s Islamic Revolutionary Guard Corps and its Quds Force, by the United States.

Iran also warned that U.S. allies in the region, including the United Arab Emirates and Israel, would face attacks if the U.S. pursued further military escalation. Trump responded by calling Soleimani a ruthless terrorist whose hands were drenched in the blood of regional conflict, and vowed that the U.S. would evaluate all options while also asking NATO members to become more involved in the Middle East.

Since 1979, Trump said, “Nations have tolerated Iran’s destructive and behavior in the Middle East and beyond. Those days are over.”