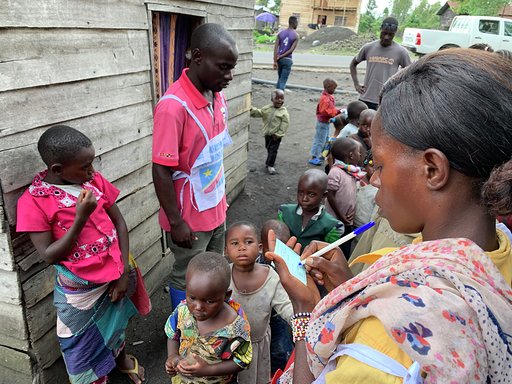 The World Health Organization says more than 6,000 people have died from measles in Democratic Republic of Congo, during an outbreak that has seen some 310,000 suspected cases reported since the beginning of 2019.

“We are doing our utmost to bring this epidemic under control,” said Dr Matshidiso Moeti, WHO Regional Director for Africa, in a statement released Tuesday. “Yet to be truly successful we must ensure that no child faces the unnecessary risk of death from a disease that is easily preventable by a vaccine. We urge our donor partners to urgently step up their assistance.”

WHO and the DR Congo, working with partners and aid agencies, were able to vaccinate more than 18 million children under age 5 last year but said in some areas it’s not been possible. All areas of the country have been affected by an outbreak that began in its southeast region, with organizations including Doctors Without Borders warning it had spread like a wildfire.

While the vaccine hesitancy seen in other parts of the world also affects Congolese – particularly in areas where conflict and community mistrust contribute to avoidance – there are other barriers. They include cold storage capacities for the vaccines, and transport and logistics problems in getting them to communities. Underlying health issues such as malnutrition also add to the risk.

The government and its partners say US$40 million more in funding is needed to support the response.

“We recognize the government’s engagement in the efforts to end the outbreak and we are grateful for the generosity of our donors. But we still need to do more,” said Dr Amédée Prosper Djiguimdé, the WHO chief in DR Congo. “Thousands of Congolese families need our help to lift the burden of this prolonged epidemic from their backs. We cannot achieve this without adequate finances.”

As the African continent speeds up its response to the coronavirus spreading from China, the…

The World Health Organization says it is saddened by the death of Dr. Peter Salama,…

WHO holds off on PHEIC designation as global virus concern spreads

As China’s coronavirus spreads across the nation and into other countries, The World Health Organization…