Home>Politics & Policy>Libya's warring sides accept ceasefire after Putin, Merkel meet
By AT editor - 12 January 2020 at 4:47 am 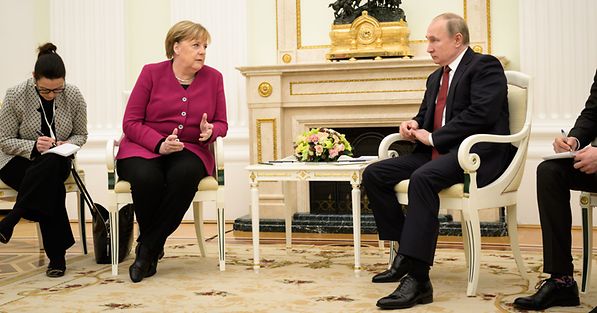 The Government of National Accord (GNA) in Libya said it welcomes a ceasefire agreement presented Saturday by the Libyan National Army (LNA) after days of diplomatic efforts to get the warring sides to return to negotiations interrupted in April by an LNA offensive on Tripoli.

LNA spokesman Maj. Gen. Ahmed Al-Mismari delivered the announcement that the LNA would abide by a ceasefire beginning at midnight but warned the GNA must assure its fighter groups honor the truce as well.

The spokesman did not indicate why LNA commander Gen. Khalifa Haftar changed his position on a deal jointly proposed by Russia and Turkey earlier in the week. Haftar had rejected a ceasefire as recently as Thursday night, saying he welcomed Russia’s interest but resisted Turkey’s involvement in Libya.

Presidents Recep Tayyip Erdoğan of Turkey and Vladimir Putin of Russia proposed the Sunday start time in a message consistent with other appeals from the international community – Egypt, Algeria and Italy among them – to return to talks that were moving toward reconciliation and a Libyan election when Haftar launched his offensive.

“Lasting peace and stability in the country can only be achieved by a Libyan-led and Libyan-owned political process based on sincere and inclusive dialogue among Libyans,” Putin and Erdoğan said. “Seeking a military solution to the ongoing conflict in Libya only causes further suffering and deepens the divisions among Libyans.”

However, Haftar’s decision follows Putin’s meeting with German Chancellor Angela Merkel on Saturday, and the announcement that Germany will host the Berlin conference meant to end the crisis in Libya. “The joint call by Russia and Turkey for a ceasefire from January 12 is a step in the right direction. Germany hopes that the Russian-Turkish efforts will bring success,” said Merkel. The European Union also supports the Berlin process.

GNA leader Fayez Al-Sarraj said he expects other nations to help monitor the ceasefire, but it follows years of fruitless intervention since former Libyan leader Muammar Gaddafi was killed in 2011. At least 300 civilians have died in this latest round of fighting with thousands more displaced.