Home>In Depth>Macron sends more troops to Sahel within new counterterrorism plan
By AT editor - 14 January 2020 at 2:59 am 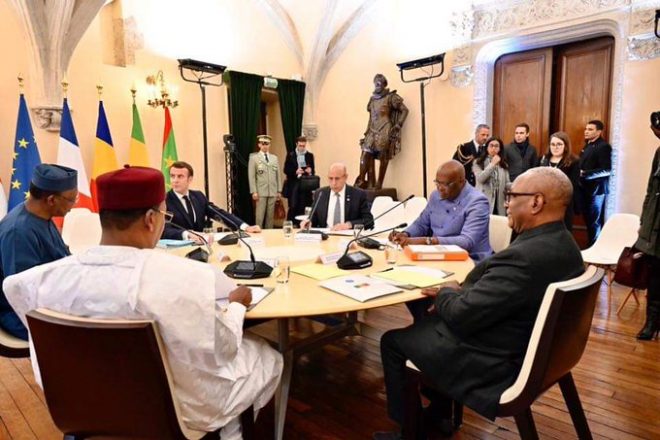 France plans to send additional troops to the Sahel and appealed for more international support for counterterrorism efforts, following a summit in the French city of Pau attended by leaders of the G5 Sahel nations on Monday.

President Emmanuel Macron said 220 soldiers will reinforce the 4,500 Operation Barkhane troops and their partners fighting alongside Burkina Faso, Mali, Mauritania, Niger and Chad. There also will be more cross-border cooperation beyond the existing 50-kilometer ranges established by the joint forces.

The decision, and the Pau summit itself, come amid increasing criticism and protests over France’s presence in Sahel nations, at the same time that extremist attacks have escalated in Niger, Burkina Faso and Mali.

Some 90 soldiers were killed in Niger last week, where President Mahamadou Issoufou said after a comparable December attack that the terrorists had become “real professionals in the art of war.” The latest deaths led to the dismissal of the Nigerien defense minister on Monday.

The participants also said they’ll step up efforts to support a peaceful resolution in Libya as talks between Khalifa Haftar, the head of the Libyan National Army, and the Government of National Accord’s Fayez Al-Sarraj failed to reach a ceasefire agreement in Moscow on Monday. The Sahel partners said they back the international Berlin conference to bring stability to the region.

Macron was careful to note that France is not in the Sahel to protect its own interests, but rather in the broader fight against terrorism that includes the G5 nations, the U.S. troops, and the new P3S launch in partnership with Germany, as well as United Nations peacekeepers, the African Union and the Economic Community of West African States.

His remarks come after a rift with G5 leaders because of hostility toward French troops fighting in the Sahel, and in a France weary of the commitment without seeing results. Macron’s concerns were echoed by French defense minister Florence Parly, who backed the president late last year in his quest for “clarity” from the African leaders about France’s involvement.

Parly welcomed the outcomes of Monday’s summit and confirmed a new “Coalition for the Sahel” under joint Barkhane-G5 authority will be created to “allow for more communication, intelligence sharing and coordination.

“We will be more efficient and more agile,” she said.

So did President Roch Marc Kaboré of Burkina Faso. “The establishment of the G5 Sahel-France Joint Staff as part of the international coalition for the Sahel will allow our armies to grow in strength and reap convincing results in the fight against terrorism,” said Kaboré.

France established its presence in the Sahel when Mali requested help seven years ago this week. Soldiers worked alongside Malian and other African troops to try to repel the terrorists, with the United Nations Security Council supporting the need for member nations to assist Mali.

As the threat from Islamic State and al-Qaeda-linked armed groups continued to grow, Operation Barkhane was launched in August 2014 and expanded France’s footprint across the Sahel. Beginning this year, “Task Force Takuba” is added to the response, bringing together special forces from European nations including Estonia.

“There is no lightning operation,” Parly warned when Task Force Takuba was announced in November. “No decisive punch action to stop the destructive madness of their ideology. It is only patience, determination and consistency that will allow us to win this long-term battle.”

From the Sahel, there is no exit

Yet when the G5 Sahel force was launched in Bamako in July 2017, many viewed it as the first step in an exit strategy for France. Macron began with a €8 million commitment from France, €50 million from the EU and €10 million each from the African partners, but he found other nations, notably a U.S. now led by President Donald Trump, resistant to the Sahel commitment.

Macron and Malian President Ibrahim Boubacar Keïta pressed on, and raised €414 million in international funding at a Brussels donor conference in February 2018, but the expense has always remained a thorny question.

Alongside the military expenditures are development initiatives, as well as the latest P3S plan announced at the G7 summit hosted by France at Biarritz in August. The P3S is meant to strengthen policing, the judicial system, and related internal and administrative functions in Sahel nations known for their notoriously weak governance – a context in which the extremists thrive, largely on trafficking and other criminal activities.

While the Pau summit seemed to smooth the diplomatic friction among heads of state, it remains to be seen how citizens in G5 nations will respond to a further entrenched France. The same might be said of French citizens supporting the protracted engagement while domestic finances continue to cause eruptions at home.

It also remains to be seen how the new coalition operates, with the next summit planned for June in Mauritania.