Home>ENERGY & COMMODITIES>Ramaphosa joins talks over Ethiopia's GERD dam project
By AT editor - 14 January 2020 at 1:03 am 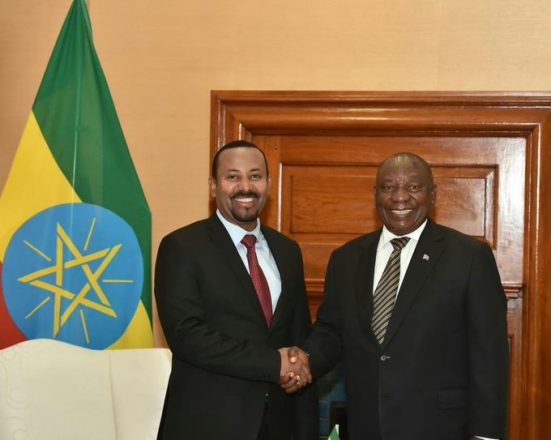 Abiy made the announcement during an official visit to South Africa at the weekend, where he and Ramaphosa discussed how the latter might facilitate an agreement between Ethiopia and the nations of Egypt and Sudan, which have steadfastly objected to the dam’s impact on Nile River resources in their nations.

“Ethiopia always believes in a win-win approach,” Abiy said. Ramiphosa is a good friend to both Ethiopia and Egypt, Abiy added, and as the incoming head of the African Union is well positioned to assist in talks with all parties to resolve the issue peacefully.

Although the years-long argument has remained diplomatic, Egypt and Ethiopia have threatened the use of force in the past. Ramaphosa said he has spoken to both Abiy and President Abdel Fattah al-Sisi, and they have agreed to move forward to try and find a solution.

“The Nile River is important to both countries,” Ramaphosa said, “and there must be a way in which their interests can be addressed.

Abiy’s government says it needs the 15,000 GWh per year in power for Ethiopians, but threats to the Blue Nile that potentially affect agriculture and water access for Egypt and Sudan have blocked progress.

The announcement came ahead of talks set for Monday in the United States, which has played host to a series of negotiations that have so far failed to deliver a deal.