Home>Politics & Policy>Ouattara promises peaceful elections in uneasy Côte d'Ivoire
By AT editor - 22 January 2020 at 4:09 am 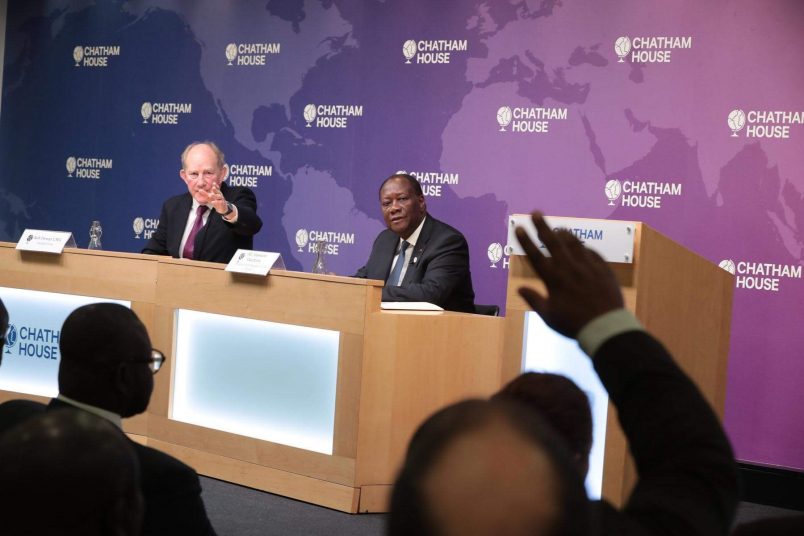 President Alassane Ouattara of Côte d’Ivoire promised Tuesday that the country’s October 2020 elections will be “democratic, transparent and peaceful,” though the West African nation is increasingly troubled over the targeting of political opponents and Ouattara’s own intentions regarding any third term.

Ouattara, speaking at Chatham House in London, addressed the issue of “how to ensure stability and inclusion” during the elections. The president described how the country got back on track following the 2010 electoral crisis, which led to a civil war in which 3,000 people died and another 300,000 were displaced.

Though he spoke in terms of the 2016 constitutional changes as a success, they were opposed by political and civil society leaders who instead saw a move for Ouattara and his now-reconfigured RHDP party to consolidate power. Ouattara also noted reforms to the Independent Electoral Commission (CEI), long eyed with suspicion by opposition leaders, some of whom said last week that they still reject CEI authority because of RHDP alignment.

While Ouattara has not committed to a third term, he has not ruled one out. The Ivorian president told Reuters that additional constitutional reforms planned ahead of the election will not include an age limit, and that may open the door for both Ouattara and rival Laurent Gbagbo.

The former president’s return to Côte d’Ivoire following acquittal for war crimes at the International Criminal Court (ICC) is welcomed by longtime supporters, but Gbagbo’s refusal to accept results of the 2010 election triggered the country’s political violence. Also considering runs are Henri Konan Bédié, who served as president in the 1990s, and the currently exiled Guillame Soro, a former prime minister and opposition leader.

“The peace and stability of our country are now irreversible,” he said.