Home>Politics & Policy>Erdogan arrives for visit in troubled The Gambia
By AT editor - 27 January 2020 at 9:05 pm 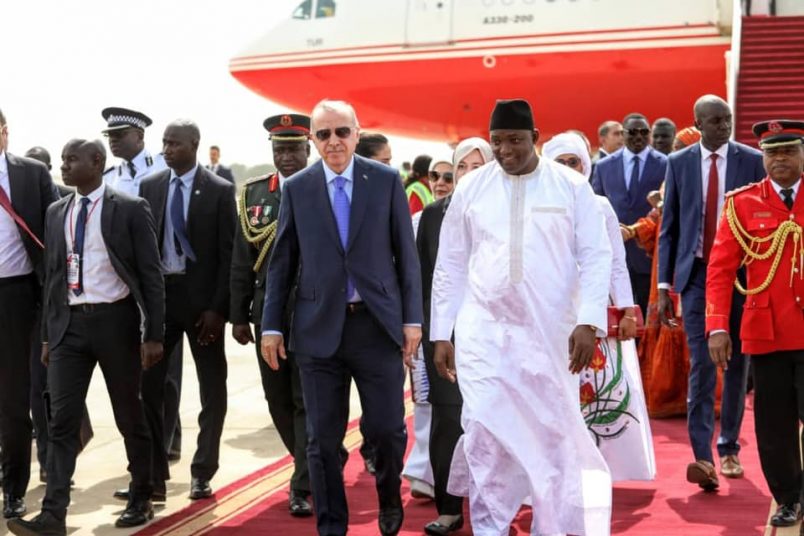 President Recep Tayyip Erdoğan of Turkey arrived in Banjul on Monday, as part of a three-nation tour that follows a stop in Algeria and will continue in Senegal.

This is Erdoğan’s first official visit to the West African nation, which comes amid The Gambia’s recent struggle over President Adama Barrow’s tenure. Advocates for a three-year term, which would have recently expired, say he’s violating his own promises but Barrow says the consitution requires a five-year term. Those tensions spilled into the street at the weekend, with dozens of arrests reported.

The Gambia also struggles with the economic fallout following the 22-year rule of exiled leader Yahya Jammeh, whose supporters have pressured Barrow to allow to return, as well as a lengthy national reconciliation process.

For his part, Erdoğan has worked to raise Ankara’s profile on the African continent in recent years, but that too has become controversial as Turkey’s presence in Libya, in support of the Tripoli-based government, and its investments in Sudan have drawn international scrutiny.

Both nations say they plan to build on existing bilateral agreements on security, trade, health care and other sectors. The Gambian government says more than 100 students currently study in Turkey, most of them on scholarships, as education remains a focal point of the relationship.

The two leaders also plan to discuss regional and international security concerns, while business forums were planned for both Algeria and Senegal.

African leaders have been quick to extend condolences to Erdoğan following last week’s earthquake in Elazığ province, in the eastern part of Turkey where at least 41 people died.

Biden plans Day One reversal of Trump policies on immigration