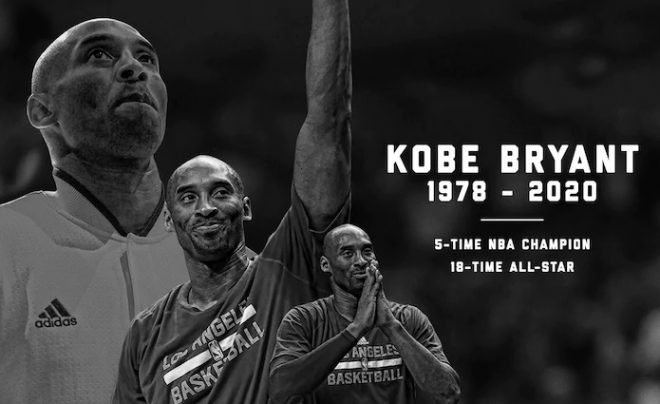 The last Twitter message in Kobe Bryant’s account was sent to LeBron James on Saturday, when his fellow Los Angeles Laker star moved past Bryant’s own all-time NBA scoring record and replaced him at third place.

“Continuing to move the game forward,” Bryant said. “Much respect my brother.”

By Sunday night, most of the world knew that Bryant – beloved whether playing on the U.S. Olympic team, or tossing hoops with kids in Soweto – was gone.

Bryant, 41, and his 13-year-old daughter Gianna were killed in a helicopter crash near his Los Angeles home, along with seven other people who were aboard the aircraft. They were en route to his Mamba Sports Academy when the helicopter, flying low because of cloudy and foggy conditions, slammed into a hillside and burst into flames.

Thousands of Los Angeles fans poured into the streets to celebrate his life and mourn his death. Bryant played 20 years for a city that, much like Los Angeles Times sportswriter Bill Plaschke, cannot believe he’s gone.

“How can Mamba be dead?” he asked. “Why this, why now, why him, why them? Kobe and Gianna leave behind an incredibly strong wife and mother, Vanessa, and daughters Natalia, 17, Bianka, 3, and Capri, who was born last summer. The horror of this is unspeakable. The tragedy of this is immeasurable.”

Far from L.A., the tributes and condolences also poured in.

“Kobe was a legend on the court and just getting started in what would have been just as meaningful a second act,” said former U.S. president Barack Obama. “To lose Gianna is even more heartbreaking to us as parents. Michelle and I send love and prayers to Vanessa and the entire Bryant family on an unthinkable day.”