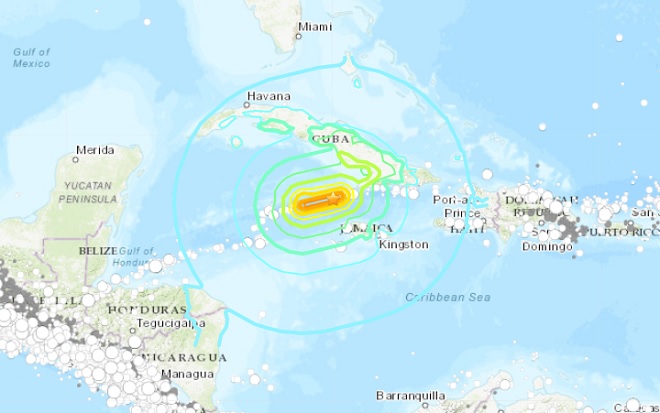 Caribbean nations affected by a 7.7-magnitude earthquake continued to deal with impacts late Tuesday, including a 6.1-magnitude aftershock near the Cayman Islands.

The original quake struck at 2:15 p.m. local time and was centered 125 kilometers offshore from Lucea, Jamaica, according to the United States Geological Survey. It was felt widely in Kingston and across the island, with the Jamaica Gleaner news outlet sharing multiple images of people evacuating buildings and government offices closing.

A tsunami warning was issued for the possibility of small waves reaching beyond Jamaica into Belize, Cayman Islands, Cuba, Honduras and Mexico. There were no reports of tsunami damage, but buildings on Jamaica were cracked while the Caymans saw sinkholes in the streets.

The tremor was felt as far away as Miami in the United States, where people evacuated buildings and rescue crews checked for damage. The Bahamas, acting on what it called an abundance of caution, also closed government offices early. People reported feeling the quake from other locations including Cuba, Dominican Republic, Haiti, Turks and Caicos Islands,

Subsequent aftershocks hit closer to East End in the Caymans, according to USGS.