Home>Health>No coronavirus cases in African nations as death toll reaches 908
By AT editor - 8 February 2020 at 2:12 am 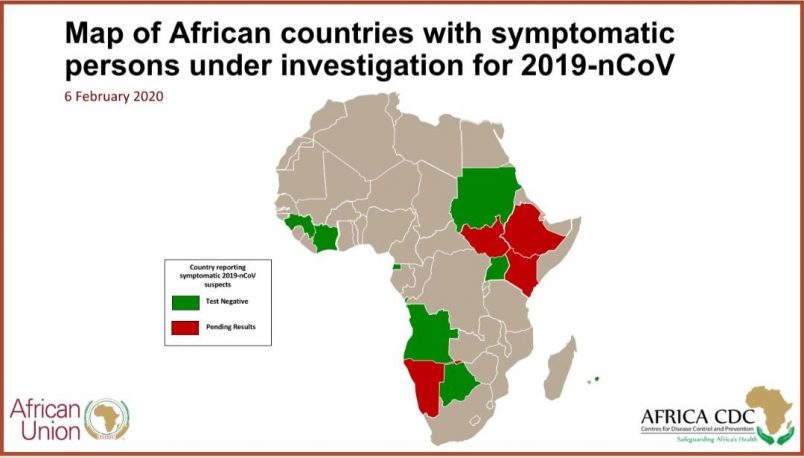 So far, there are no confirmed cases of the coronavirus on the African continent, according to the Africa Centres for Disease Control and Prevention on Friday.

Countries including Botswana and Sudan have isolated and investigated some people for testing, but have seen those results all come back negative. Meanwhile, possible cases in Namibia, Kenya, Ethiopia and South Sudan are pending.

“Until early this week there were only two laboratories – one in Senegal and the other in South Africa – which had the reagents needed to test samples and they have been working as referral laboratories for countries around the region,” said the World Health Organization’s African authority. “Four more countries (Ghana, Madagascar, Nigeria and Sierra Leone) have now reported they can conduct tests as well.”

While Africans have so far been fortunate, they’re encouraged to remain vigilant about possible infection from 2019-nCoV, the often-fatal virus that has spread across China since late December and into two dozen other nations.

“WHO has identified 13 top priority countries in the region, which due to their direct links or high volume of travel to China need to be particularly vigilant for the novel coronavirus,” said WHOAFRO. Those nations are: Algeria, Angola, Cote d’Ivoire, the Democratic Republic of the Congo, Ethiopia, Ghana, Kenya, Mauritius, Nigeria, South Africa, Tanzania, Uganda and Zambia.

The latest death toll from China has reached 908, while the total number of confirmed infections neared 36,000, Chinese officials said Sunday.