Home>Politics & Policy>Ethiopia hosts Pompeo with economy, security top of mind
By AT editor - 19 February 2020 at 4:16 am 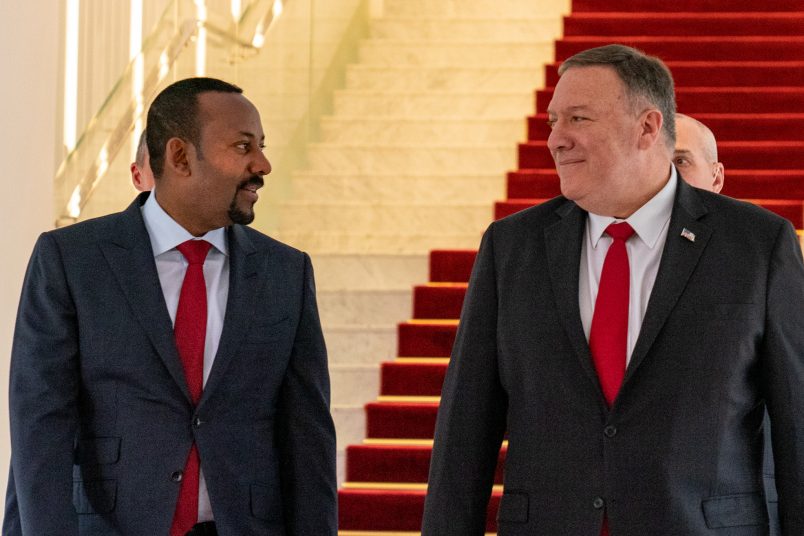 United States Secretary of State Mike Pompeo praised Ethiopia’s progress on important economic reforms, but said there is much work to do on regional security as well as the unresolved impasse over the Grand Ethiopian Renaissance Dam (GERD) project.

Pompeo made his remarks during a press conference Tuesday alongside Ethiopian Foreign Minister Gedu Andargachew in Addis Ababa, where he also met with African Union chief Moussa Faki Mahamat.

“The Horn of Africa is a pretty dangerous neighborhood.  We recommitted this afternoon to our shared fight against al-Shabaab and other Islamist terror,” said Pompeo, whose meetings included time with Ethiopian Prime Minister Abiy Ahmed and President Sahle-Work Zewde. He earlier visited Senegal and Angola during his trip.

“I also want to commend the Ethiopian people on their bravery and thank them for their sacrifices as members of UN and African Union peacekeeping missions in Somalia and elsewhere,” Pompeo added. “Peace in Africa will be won by Africans.”

The U.S. has hosted talks between Ethiopia, Egypt and Sudan on the GERD project without a final agreement on how to protect Ethiopia’s demand for hydropower energy while ensuring Nile River water rights for the other nations. Yet Pompeo seemed optimistic the negotiations will be successful, while Gedu agreed that a win-win solution is the goal.

“Many of the elements of an agreement are now moving closer to finality, but there’s still work that remains,” Pompeo said. “We have been heartened in the context of those conversations to watch each of those countries recognize the needs and concerns of the other two countries.”

The U.S. secretary also announced $8 million in funding to fight the locust invasion that’s devastating Horn of Africa crops, and a $100 million commitment to fight the coronavirus in a number of countries including China.