Home>News>Locust destruction spreads into Red Sea, Persian Gulf nations
By AT editor - 22 February 2020 at 1:46 am 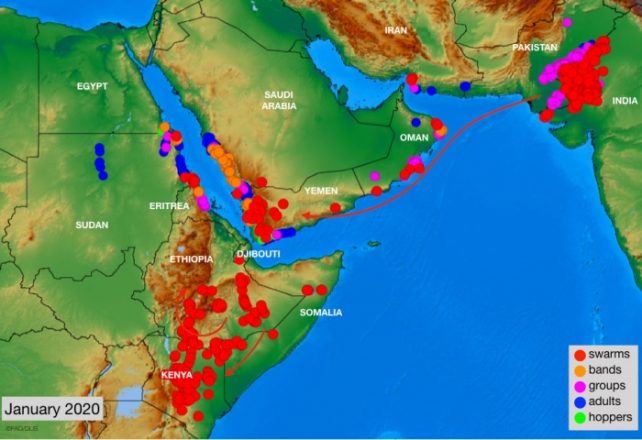 The locust swarms wreaking havoc in the Horn of Africa have now spread across the Arabian Peninsula and into Kuwait, Bahrain, Qatar and the southwest coast of Iran, according to the United Nations Food and Agriculture Organization (FAO). They’re also affecting Red Sea nations, as well as those already hardest hit.

“The situation remains extremely alarming in Kenya, Ethiopia and Somalia where widespread desert locust infestations and a new generation of breeding threatens food security and livelihoods in the region,” the FAO said in an assessment published Friday. “The situation is less worrisome in Uganda and Tanzania.”

In Kenya, swarms continue to mature and breed in northern and central regions. “At least one swarm arrived in a tea plantation in the southwest county of Kericho while other swarms have been seen further north in Turkana county. There have been no new reports of swarms near Mt. Kilimanjaro,” the agency said.

Uganda has seen swarms heading north but reproduction doesn’t seem to be as severe, while Tanzania has not reported swarms since February 9 even as South Sudan saw them enter from Uganda on February 17.

In Somalia and toward the Red Sea, however, the situation remains concerning.

“Breeding is in progress along both sides of the Red Sea in Egypt, Sudan, Eritrea, Saudi Arabia and Eritrea,” the FAO said. “Control operations are in progress in all countries but remains limited in Yemen.”