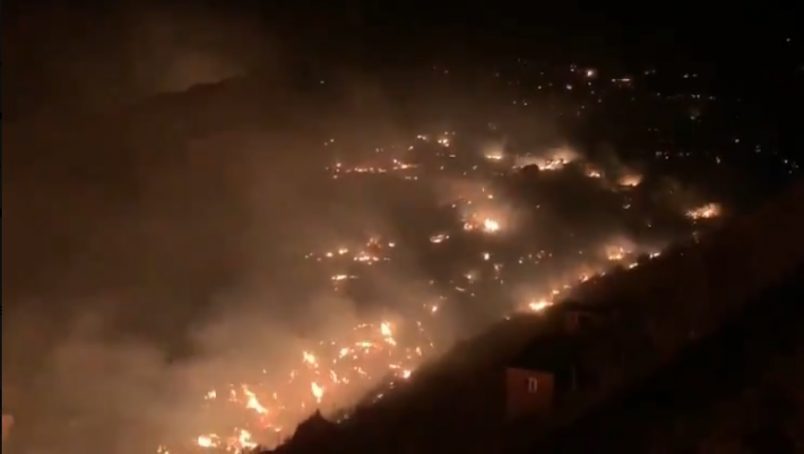 Authorities in the Canary Islands called for evacuations as a Saharan dust storm, in some places driven by hurricane-force winds, fueled wildfires that drove people toward the beaches to seek refuge.

In Tasarte, fires broke out on Saturday night and claimed some homes, although firefighters appeared successful in setting up a perimeter and containing the blaze. Cabildo Gran Canaria, the local government agency, said about 300 hectares were affected in that location, as firefighters from across the island responded to fight the flames and assist the displaced.

New fires emerged further inland at Roque Benteyga and Cruz de Tejeda, yet even as conditions eased there on Sunday, the erratic winds returned across the Inagua forest region and back toward Tasarte.

“The neighborhoods of El Hoyo and Tocodomán must prepare to evacuate,” the agency said in a message shortly after 2 p.m. Sunday, directed to communities just north of Tasarte. “The situation may change, but they must prepare.”

Cabildo de Gran Canaria also closed all recreational, hiking and camping areas in the region until the alert situation passes, but said popular beach tourist areas are not affected. All Carnival-related events were canceled by the government. There were no immediate reports of casualties from the fires.

Meanwhile, the orange dust blown from the African continent shrouded the islands, taking down trees and making road travel difficult. The calima winds, as they are known locally, created poor visibility and forced flight cancellations as Gran Canaria Airport remained closed until the weather threats pass.

Spain’s Agencia Estatal de Meteorología (AEMET), which forecasts for the island territory, said some wind gusts were expected to reach 80-100 km/h with hurricane-force winds of 120 km/h possible at higher elevations. Conditions were expected to improve on Monday.