Home>Politics & Policy>Airwars site launch tracks U.S. in Somalia, amid claims of another civilian death
By AT editor - 27 February 2020 at 12:57 am 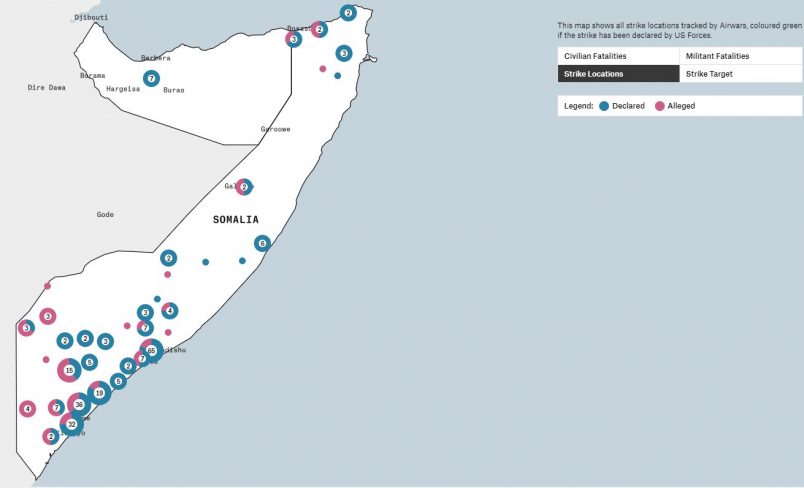 There’s a new online database from Airwars, a not-for-profit project based at the University of London that tracks international military actions and assesses harm to civilian populations in Libya, Iraq, Yemen and Syria.

The organization is now tracking incidents in Somalia, with an emphasis on how United States drone strikes used in the fight against al-Shabaab may be responsible for civilian deaths and injuries.

Such air strikes include three this week, according to the U.S. Africa Command (AFRICOM). The U.S. military says three terrorists were wounded at Dujuuma on Sunday, another was killed Monday at Jilib, and two known al-Shabaab members linked to a January attack at Manda Bay in Kenya were killed Tuesday at an unknown location.

AFRICOM is careful to insist that no civilians are harmed by air strikes but that’s often in dispute, including this week at Jilib. Somali telecom firm Hormuud says the U.S. air strike killed one of its employees while he was at home on his farm. It remains unclear if the Hormuud employee had credible ties to any terrorist group.

The Airwars team says at least 61 civilians have been previously harmed by U.S. actions in Somalia since strikes began in 2007.

“AFRICOM has publicly admitted two civilian deaths to date,” the organization said in a press release announcing its new website launch on Tuesday.

“Somalia represents one of America’s most secretive conflicts, with only partial disclosure of AFRICOM actions and complete secrecy on a parallel CIA campaign,” says Airwars. “Yet affected communities still deserve public transparency when civilians are harmed. This new resource will, we hope, help improve US military accountability.”