Home>In Depth>Bachelet turns to Africa in report to UN Human Rights Council
By AT editor - 28 February 2020 at 5:02 am 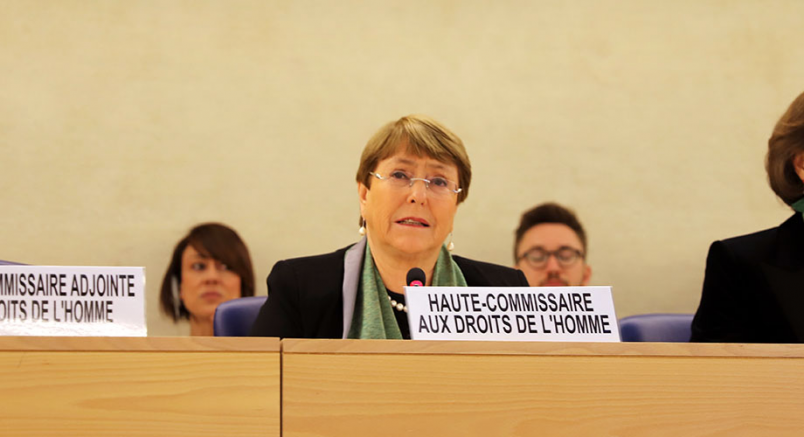 As the United Nations Human Rights Council holds its annual meeting in Geneva, High Commissioner Michelle Bachelet of OHCHR, the UN human rights agency, provided an overview on Thursday of concerns in various African nations beginning with the Democratic Republic of Congo.

Bachelet, a former president of Chile who was once a political prisoner herself, spent time in Ituri province in the eastern part of DR Congo in January. The region continues to fight an Ebola outbreak that began in August 2018, although that’s now contained to the Beni health zone in neighboring North Kivu province, but it has long been marred by violence among armed groups who have been fighting for two decades.

“Many of the people I spoke to had had limbs cut off and watched family members being massacred,” she said in her address to the council. “One man had been recovered from a pile of bodies. But their demands for justice, and for respect of their human rights, were strong and clear.”

“I was inspired by this search for positive solutions, and this fundamental generosity and solidarity of human beings even in the face of massive challenges,” Bachelet said. “I see this as an approach that all of us could emulate.”

Yet the list of challenges is long, and the OHCHR chief focused on a number of African nations in describing them.

She noted the Sahel countries, whose G5 leaders just completed a summit earlier this week in Nouakchott as Mauritanian President Mohamed Ould Ghazouani takes over the rotating leadership. The G5 leaders vowed to fight the scourge of terrorism in their countries, committing resources that will now include the support of 3,000 African Union troops deployed to the region.

The extremist attacks in the G5 nations, particularly in Burkina Faso, Mali and Niger, have escalated since last year. The UN says there were more than 4,000 killings in 2019, a 500 percent increase over 2016, and that’s created a humanitarian as well as a security crisis. It’s also limited development in the Sahel, which the international community has hoped to see flourish, while adding to the continent’s migration issues.

“In Mali, there have also been intercommunal attacks. Across all three countries, there is a clear need for an approach that extends beyond a military focus, to address root causes of violent extremism,” Bachelet said. Solutions need to address extreme poverty, inequalities, exclusion, and inadequate accountability and protection of human rights. OHCHR will open a new Country Office in Niger this year and expects to strengthen its presence in Burkina Faso.

Nigeria also remains an OHCHR concern, with increasing attacks from Boko Haram, Islamic State of West Africa Province and other jihadist groups, as well as communal violence. That’s taking a catastrophic toll on entire Nigerian communities particularly in the country’s northeast, but Nigerian forces also are implicated in harming civilians.

An Amnesty International report two weeks ago followed news that the Nigerian military was razing and burning villages, and forcibly displacing people in response to an uptick in Boko Haram attacks that began late last year. Osai Ojigho, the NGO’s director in Nigeria, said the incidents should be investigated as war crimes.

“They repeat a longstanding pattern of the Nigerian military’s brutal tactics against the civilian population. Forces allegedly responsible for such violations must be suspended immediately and brought to justice,” Ojigho said.

Bachelet warned that in Nigeria, there is reason to be concerned about a range of human rights issues, including climate change and land use.

“Kidnapping for ransom, and sexual and gender-based violence also contribute to insecurity, amid sharpening ethnic, regional and religious polarization across the country,” Bachelet added. “It is vital that security forces conduct all their operations in full compliance with human rights standards.”

The OHCHR chief touched on political crises in Burundi, Cameroon and Guinea, where President Alpha Condé remains unmoved by waves of violent protests against any plan for him to seek a third term in office. “Reports also indicate that ethnic divisions are deepening, with increasing incitement to hatred and violence on social media and at political rallies,” said Bachelet. “Any further escalation of this crisis could be profoundly harmful.”

Communal violence in South Sudan also needs to be addressed, though Bachelet welcomed the newly formed transitional government agreed to by President Salva Kiir and Riek Machar. For lasting peace to succeed, she said, the government also must end repression against its citizens and the delay of justice and investigations.

OHCHR also is concerned about the soaring numbers of Egyptians sentenced to death and the continued human rights violations against its citizens. In addition, separate reports on Central African Republic, DR Congo, Libya and Eritrea have been prepared for the Human Rights Council, which continues through March 20.