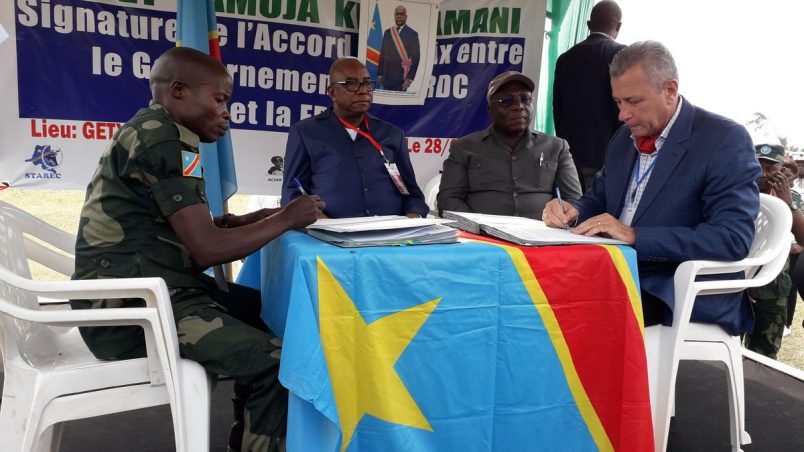 The Congolese government has signed a peace agreement with the Ituri Patriotic Resistance Force (FRPI), the last of large armed militias fighting in the eastern Ituri province of Democratic Republic of Congo.

The signing ceremony took place Friday at Tata Akobi Stadium in Gety, a city where Congolese FARDC forces and peacekeepers with MONUSCO, the United Nations mission in the country, held an established presence. The agreement had been postponed for several months and was well-received by local populations, MONUSCO said in a statement.

The deal requires the FRPI to cease functioning as a military organization and instead become a political party. Former FRPI members expect legislation that will provide them with amnesty, except on serious charges of war crimes, crimes against humanity, human rights violations, sexual violence and crimes of genocide, according to MONUSCO.

“This is a day of victory and of great hope,” said resident Anualite Zawadi, in an interview with MONUSCO. “For 20 years, we suffered a lot, the women were raped, we hardly went to the fields, the children hardly went to school, our community was stigmatized.”

Zawadi, 27, told MONUSCO she hopes the agreement will be upheld and deliver on the promise of peace.

According to the Norwegian Refugee Council, some 500,000 people have been displaced across Ituri with thousands more crossing the border into Uganda. Fighting between the government and various armed groups has lasted decades, and has spilled into Ituri from neighboring North Kivu in recent weeks.

“In some of the villages, displaced people make up more than half of the population,” said the Norwegian Refugee Council. “Many move from host villages to displacement sites because host communities cannot support additional families in their homes due to extremely scarce resources.”

The NRC says there have been 45 attacks on schools and hospitals since early January, and one in every three people now needs humanitarian assistance.