Home>LEADERS & COMPANIES>Famous 'Sefi' portrait by Enwonwu to be part of Sotheby auction
By AT editor - 12 March 2020 at 5:31 pm 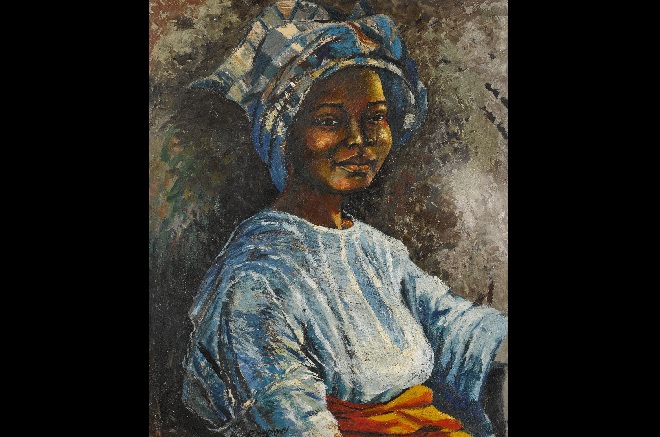 Another painting by Nigerian master Ben Enwonwu is headed for auction at Sotheby’s later this month, this time with an intriguing story believed to link the work to the Ebira people of central Kogi state.

Painted in 1953, “Sefi” features a woman who until recently was known only as the “Nigerian princess.”

“Upon close examination, Sotheby’s specialists noticed intricate details which lead them to believe the sitter could be Princess Judith Safinet ‘Sefi’ Atta,” said the London art house. “The sitter’s blouse is fashioned from the Okene cloth produced by the Ebira women of Sefi’s hometown.”

So Sotheby expert Hannah O’Leary reached out to artist Obi Okigbo, the daughter of the princess, who said her mother knew Enwonwu well.

“When Hannah sent me the photo of the painting, I felt like I was like looking at a portrait of myself. The family resemblance is remarkable,” Okigbo said.

“Sefi” will appear at auction for the first time on March 25, as part of the Modern and Contemporary African Art auction, with an estimated value of US$250,000 to 375,000.

Until now, the portrait has been in the family collection of an unidentified but prominent West African academic and writer.

“Stories like this are the reason I love what I do. Not only have we come across an outstanding early painting by Ben Enwonwu, we have also uncovered a moving story about Sefi herself – an accomplished force in the fight for women’s right to education in Nigeria and beyond,” said O’Leary.

“This portrait sits right at the crux of the cultural and artistic landscape of 20th century Nigeria. As the battle for a unified identity intensified, so did the passions of the writers, poets and painters who were working side by side – Ben Enwonwu, Chinua Achebe, John Pepper Clarke, and the poet Christopher Okigbo, the latter of whom Sefi married. It has been an honor to hear this story.”