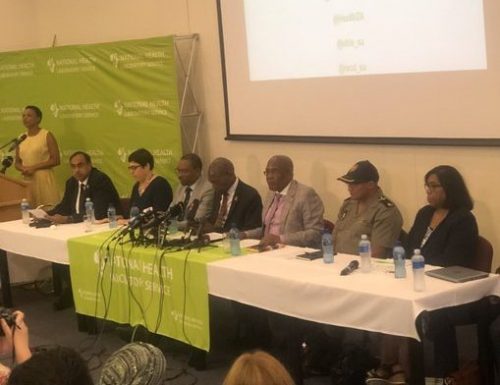 The number of confirmed coronavirus cases in South Africa has risen to 17, with news that a 32-year-old man in Free State is the first person to become ill through known community contact.

The man was in contact with a Chinese businessman, according to the South African ministry of health. He was one of four cases added to the total on Thursday, with the others – as in all prior cases – connected to travel.

The new cases include a 38-year-old man from Durban who works in Turkey and was home visiting family. He traveled through the United Kingdom and arrived on March 7. A 27-year-old woman from Mpumalanga who returned the same day from the United States also tested positive, as did a 43-year-old man from Johannesburg who traveled to the U.S. through Dubai and returned last Sunday.

All of the patients are isolated and receiving treatment, authorities said, but evidence of community transmission marks a shift in South Africa’s situation as the World Health Organization officially declares the outbreak a global pandemic.

“Pandemic is not a word to use lightly or carelessly. It is a word that, if misused, can cause unreasonable fear, or unjustified acceptance that the fight is over, leading to unnecessary suffering and death,” said WHO chief Tedros Adhanom Ghebreyesus.

In Egypt, there were 67 confirmed cases by Wednesday, while Côte d’Ivoire confirmed its first case.  The outbreak that began in Wuhan, China in December now has a total of more than 124,500 cases with 4,607 fatalities in at least 118 countries.